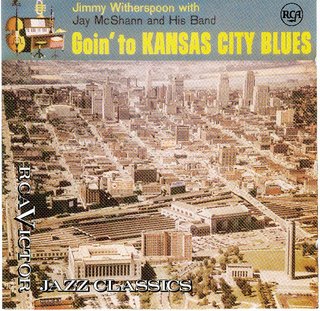 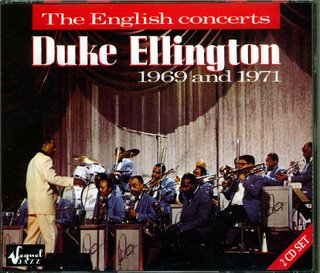 The Ellington Birthday Concerts and the Jimmy Witherspoon Album

"Good Lord, its one of those nag things again!". You are right!! They have become a bit sporadic of late, but all with good reason. I trust at least SOME of you have been listening to the 2 jazz programs on Cookham Summer FM (87.90 or via www.cookham.com) and can appreciate that talking some rubbish on a microphone does take a little preparation! Honest.

But, at least this week, you can read about the local jazz events, and not just listen to them. If you do want to listen, then Mondays at 9 pm brings you "Mama Africa" followed by "The African Influence in Jazz" taking you to 10 pm. On Fridays "Never the Same Way Once" brings you 3 hours of jazz music and comment from 8 pm 'till 11 pm.

So now about live jazz:-

On the First Tuesday of each month, in Marlow's Liston Hall you can go and see Club Django.
ALSO on the first Tuesday of every month, you can go to The Bourne End Community Centre and see Mo's selection of living musicians for around £4, but this does include nibbles at half time. Start time 8.30 pm.

Every Thursday you can catch The Clive Burton Quintet at The Hedsor Social Club, 8.30 till 11 pm £3 to get in, raffle to get out (some never make it out!!).

Sundays at lunch time you can listen to Zane Cronje on piano at The Christopher Wren in Eton, and in the evening from 8 pm you can go to The Fifield and hear Century Jazz for free, but you will get raffled to get out.

One cd set that I played from last Monday has been in my collection for many years.A double album of Duke Ellington recorded during his English tour over the period of his 70th birthday in 1969. Its the Ellington Orchestra at its best, well recorded before a living audience. All the top names were in the band, Hodges, Gonsalves, Carney, Cootie Williams, Cat Anderson, Lawrence Brown. All playing at their collective best. My copy from 1991 was on Sequel Records, part of the Castle Communications group. Numbered by them as NED CD 183.

One cd already selected for a future broadcast is Jimmy Witherspoon with Jay McShann and His Band recorded in 1957. This album has the legendary J.C.Higginbottom on trombone (He wrote "Give Me Your Telephone Number"), and on some of the tracks Emmett Berry on trumpet. You will also find Kenny Burrell on guitar. Listen out for that, because its a cracking good blues album.

BUT, I must keep digging at the CD face, or we wont get Fridays 3 hours put together. DO listen out on Friday, because I will be taking to Zane Cronje about his life in music, and he will be playing live on air. AND Simon Spillett is coming in to give a talk about the late great Tubby Hayes.

Geoff C
Posted by Geoff Cronin at 1:34 AM No comments: 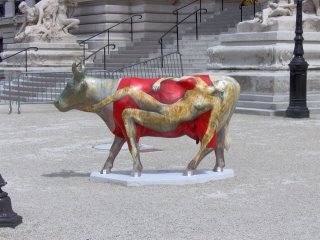 Perhaps why the French love the farm subsidy?!! 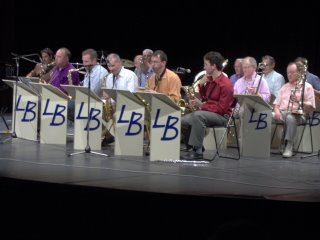 The Conserertoire's own "Little Band 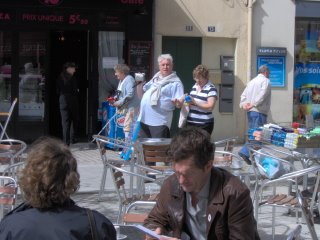 Its Tuesday (not Wednesday Night In Cairo) and I'm actually starting a Nag! The last few weeks it has been sporadic, but even I take a few days off now and again!

First an advance notice. Do look at the following web link, and you will see mention of Jazz in Thame. As this is not a million miles from your area, and jazzeddie is a really nice chap, you could think of supporting his events. http://www.jazzeddie.f2s.com/

Tonight, and nearer to home, it being the first Tuesday in the month, The Bourne End Community Centre will be providing you with Harry Pitch and Jack Emblow plus friends to entertain you, 8.30pm onwards in the bar. £3 to get in and you get free interval refreshments (actually I have a vague recollection that the price is being increased by £1, but its still amazing entertainment value).

Thursday (it could be half-past two in Khartoum) The Clive Burton Quintet play the Hedsor Social Club, 8.30 till 11 pm, £3 to get in, raffle on top to get out, and wonderful music in between. Audiences have been a bit thin these last few weeks (OK I wasn't there, but I do have spies) and there is a genuine concern that we cannot continue on its present basis. It is unfair on the musicians to expect them to come and play to half a dozen people. So during the next few weeks, record the football, we wont tell you the result and you can watch it when you get home!!

Sunday, Jazz at Fifield from Century Jazz 8 pm onward, raffle funded. The Fifield will still do you a cooked evening meal, which is unusual for a pub on a Sunday. The food is excellent by the way.

Also on Sunday at Lunchtimes you can catch Zane Cronje and Lynn Garner at The Christopher Wren on Eton Bridge. So if you fancy treating yourself to good food and good music at Sunday lunchtime, do give it a try.

One last thing. Commencing on Monday 12th June Cookham Summer FM will start broadcasting 24/7 on 87.9 FM. and Jazz will feature at least twice a week. I'm doing a 1/2 hour slot on Monday evenings about the African influence in Jazz, and together with Charles Benson and Richard Kellaway we will be presenting "Never The Same Way Once" An eclectic program of jazz music and interviews from 8pm to 11pm every Friday evening. Do tune in. If you are outside the range of this local radio station, it will be available as a web cast on you computer. Just go to http://www.cookham.com/ and follow the link. Do that, and you will be able to listen to some of the recorded jazz that I have been nagging on about these last few months (and years!!).

See you soon at a gig near me!

Geoff C
Posted by Geoff Cronin at 4:05 AM No comments: 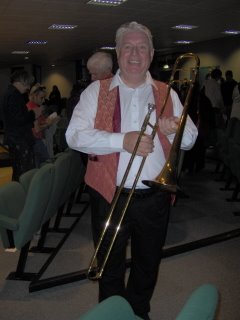 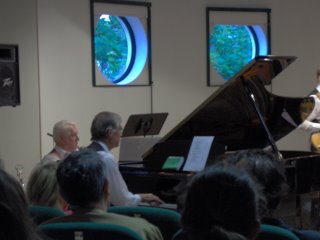 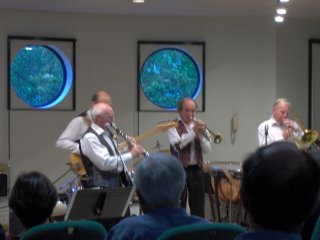 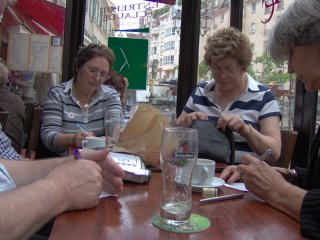 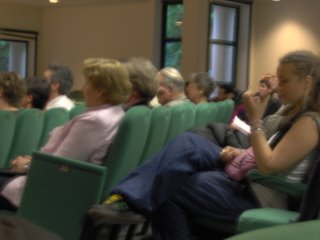 Some of the pictures (in reduced size format) taken on Cookham's fabulous Shirtlifters triumphal tour of Paris. You will notice the enthralled audience, and the band bar pastimes, as well as the actual musicians in full flow. I would point out that ALL the photos were taken without flash, using available light only in order not to disturb either the audience or the performers.

More info on local jazz comes again next week. And a full jazz nag for all the lucky recipients
Posted by Geoff Cronin at 8:53 AM No comments: