It’s been a week or so since I last issued a new blog, so on this lovely day for rain, I thought I would do another one!!

First up, a plug for Hedsor Jazz. I couldn’t be with you last week, but I gather you did all turn out to cover my absence, and that it was a cracking session by the regular Clive Burton Quintet. This week we have a slight reorganisation of personnel, Clive is playing away again this Thursday and with Mike Wills as our Reed section we have that wonderfully talented guitarist John Coverdale. I have a feeling that the engine at the back will be slightly changed too, with maybe a different bass player to Mr. K. Rankine!! (I think he is also playing away, this time in Dorset).

What will be usual, the admittance price. It will be still be just £5, and the start time for the music is 8.30 pm. Normal service regarding CD sales will also be resumed this week!

Do put a date in your diary. October 27th. We hope to hold another gala evening in Hedsor's Big Room. This will be to raise funds for our own bank account in order to safeguard the finances for future Hedsor Jazz. We were going to do this earlier in the year, but due to Zane’s illness we raised money for him and then for the Thames Valley Hospice instead.

Next year we hope to return to our usual Cancer Research fundraising concert type program. 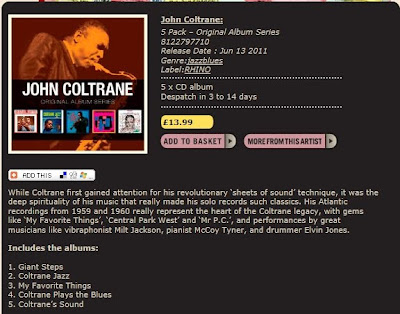 Two quite different ones this week. First Chronologically is a set of John Coltrane albums from the 1960’s.

I must confess that I find Coltrane hard going sometimes, but these early albums are the ones that are most accessible, and contain the reasons why he became a jazz icon.

Second up is a slightly later album by a band that I always enjoyed but never saw live. Weather Report Live in Offenbach in 1978 is a new release on the Rockpalast label. A double CD with Joe Zawinul and Wayne Shorter with Peter Erskine and Jaco Pastorius as the Rhythm Section.

The group is at its most spacious, crisp and cogent. Released on two discs, the 18 pieces are taken from every stage of their decade-long history with only three from hit 1977 album Heavy Weather. Extensive in every sense. Wayne Shorter is very involved too, which always helped. Exciting, tuneful a great addition to anyone’s Weather Report Collection. Jazz Rock at it’s best. MIG 80092 2CD

Posted by Geoff Cronin at 2:35 AM No comments:

Tonight, Thursday August 4th, at Hedsor Jazz , as a very special guest we have saxophonist Don Wright with Clive Burton and the quartet. Many will remember the beautiful saxophone solo he played at Zane's funeral. That was a sad time, but tonight I'm sure it will be just as memorable, but with a little more lightness as well. Usual £5 entry 8.30 pm start time.

For some years now we have been constantly asking Vasilis Xenopoulos where his Cd was? Many of us think of Vasilis as being a major player in Modern Jazz, who excites us every time he plays. To do this for over 3 years and for us not to have the means of buying a souvenir of our live enjoyment has been a real disappointment.

Well, the waiting time is over “Loud City” can now be yours!

Has it been worth the wait?

BUT it has waited since 2009 to get this far, as the recording is of the band that first came to the Cookham Festival in 2009, it being recorded in April that year. For lovers of Hammond Organ that is no bad thing, as it has Sam Gambarini as 2/3rd of the rhythm section! Sam has now returned to Italy, so having him on this CD is an added bonus.

The material is all composed and arranged by Vasilis, and anyone who has heard him over the last 3 years will recognise many of the tunes. “EJF Theme Tune”, “Street Dance” and “Loud City” itself will all be familiar.

Nigel Price is on guitar and Chris Nickolls on drums. It all goes to make this a very enjoyable CD, well worth buying for anyone, including the Cookham Festival crowd, who heard the music live.

The wait I think has been because it is now out on a major jazz record label, 33 Records. This should give it the wider spread distribution that I think it deserves.

Lets just hope that it doesn’t take as long again for us to have a recording out of the version of Xtet that did this years Cookham Festival!!

One of the titles on the CD is "Lazy Sunday". I don't think Vasilis knows what that is! If my information is correct, last Sunday he played Merlins Cave until 3 pm, and then helped to close the Ealing Jazz Festival with The Sound of 17!! He probably even had time for tea!!

Posted by Geoff Cronin at 3:04 AM No comments: