THIS WEEK (Thursday April 26th) we welcome back that wonderful vibraphone player Alan Grahame.
He has been our guest on many occasions, and has never worn out his welcome! His playing is wonderful, and if I can have some of his vitality at his age I will rejoice and be greatful!! Our usual selection of strolling players will keep him company, but expect some Benny Goodman sounds coming out of our session at Hedsor this week. “7 Come 11” please!!

Last week we had a great two tenors week (no I don’t mean it cost you £20 to get in!), with Robert Goodhew alongside our own Mike Wills. Robert had brought along some of HIS charts, and we heard some new tunes with Mike doing some superb reading. I only managed to grab the second set on my mobile phone, but do have a listen via my DropBox files at

I haven’t edited out anything except the raffle, so if you don’t want to hear the announcements just play the “odd” numbers.

Geoff Swaffield’s photos from the evening are below. 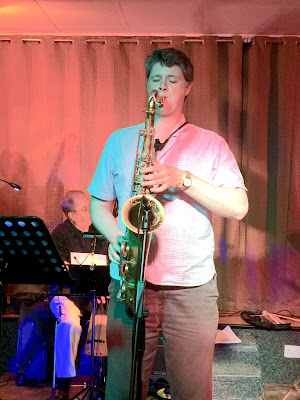 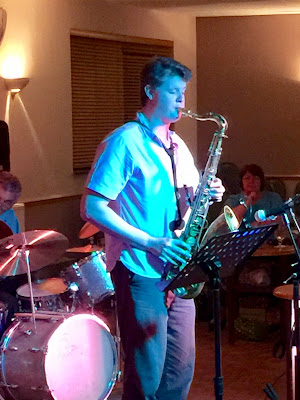 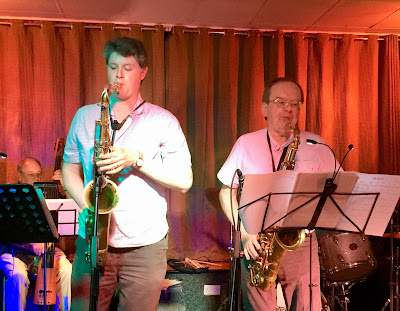 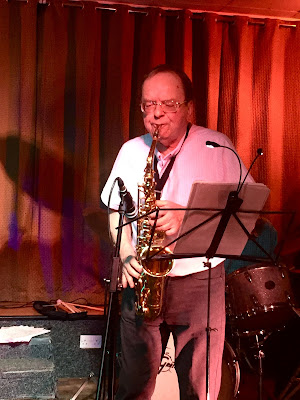 Coming up in May

We have the Quintet on the 3rd, guitarist Terry Hutchins on the 10th and saxophonist (and larger than life character) Tracey Mendham on the 17th.

That’s me blogged out for this week, its short and sweet as I’m off to celebrate someone else’s special birthday. Mind you at my age ANY birthday is special!

See you all very soon (but only if you turn up at Hedsor Jazz!)

Posted by Geoff Cronin at 3:12 AM No comments:

A short blog this week.

As mentioned last week, I have been busy packing PC’s and laptops for export to  where they are used by a village school to teach their youngsters. I am told by the chief that 450 children a week are taught on what I have sent out over the years, all donated by local people as they were now surplus to their requirements. So, jazz has been in short supply this week. 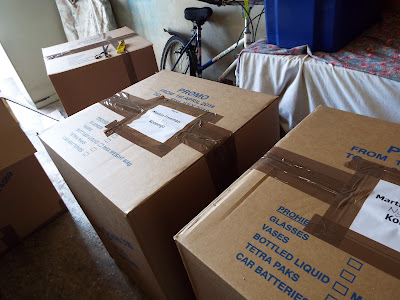 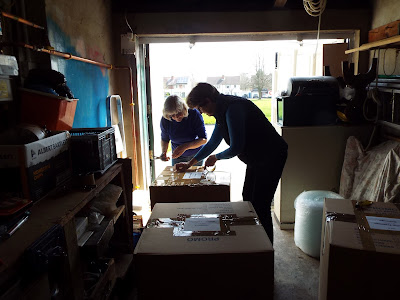 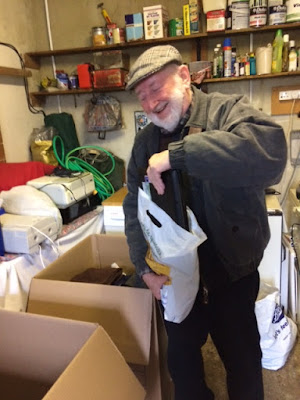 However, I am looking forward to this Thursday, as we have a return visit to Hedsor by tenor saxophonist Robert Goodhew.

Jazz recorded listening was also truncated during the past week as we entertained a lady chief of the village (Nyaboo). She is however a very good choral singer and I have listened to large chunks of Mendelssohn’s “Elijah” off YouTube whilst she memorised the score. She is appearing in ’s Albert Hall in June!!

So join me in my Jazz rejuvenation on Thursday for a listen to Robert alongside our regular guys in the band.

One last mention. Our Brunel Student (Rory) is doing a grand job in trying to raise the awareness of students to jazz and to Hedsor Jazz in particular, and he has started a FaceBook page in order to spread the word. Please take a look, and pass on to others, with a suitable glowing comment about how good your experience of it all is!! PLEASE!

Posted by Geoff Cronin at 2:37 AM No comments:

This week, on Thursday 12th April we look forward to a return by Lester Brown on trumpet to make up The Clive Burton Celebration Quintet, the line up of which is completed by Mike Wills on reeds, Nigel Fox on keyboard, John Monney on bass and Martin Hart on drums. We haven’t seen Lester for a week or so as he managed to slide his car out of commission in the recent spell of winter! 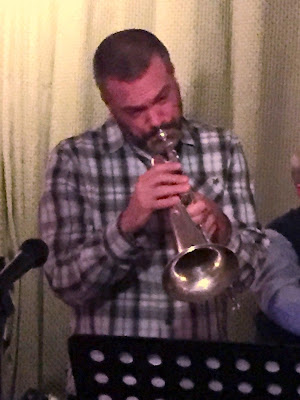 Looking back on last week our session on Thursday had a paring of saxophonists in Mike Wills and American Frank Griffith. A really nice session. Neither of the saxophonist had played together before, and we, the audience, had a great time. But so did the two front liners. They were both very complementary about each other at the end of the evening. 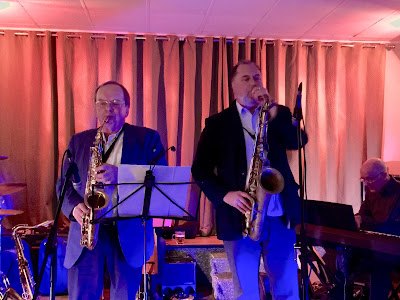 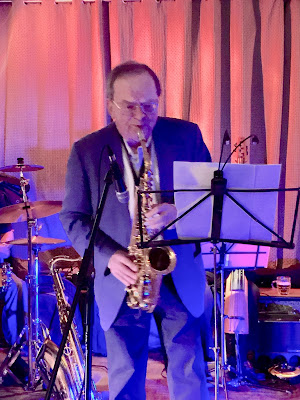 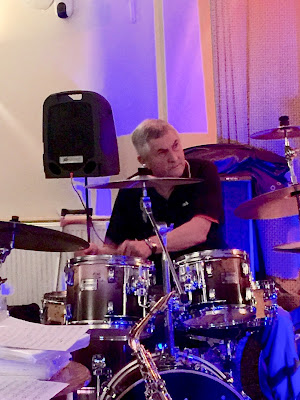 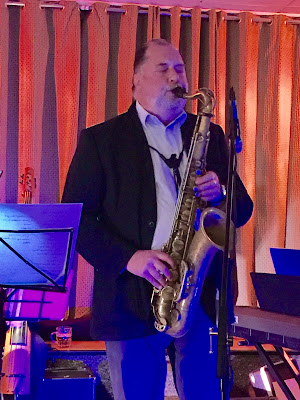 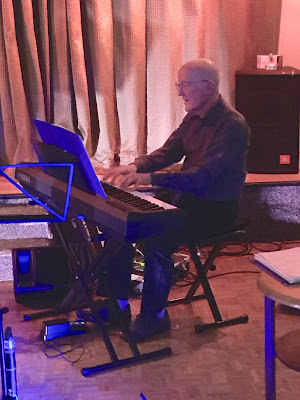 Frank had played for us a number of times before, but always when Mike was unable to be with us. Having recently retired as a tutor at he now lives in , and although he found the roads around us “dark and narrow”, he has promised to come to us again.

Also last week Jazz Angels went along to the Cancer Research UK Shop in Maidenhead and presented them with two cheques as a result of last months cancer fundraising concert. Two cheques because one donation had been made out directly to CRUK, the other was from Jazz Angels; the total being given amounted to £525. So well done all, a really great result. 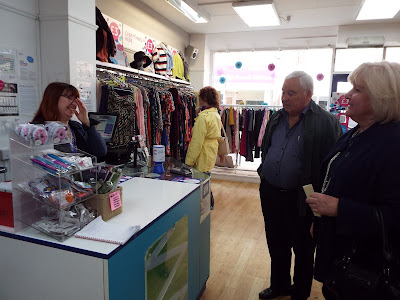 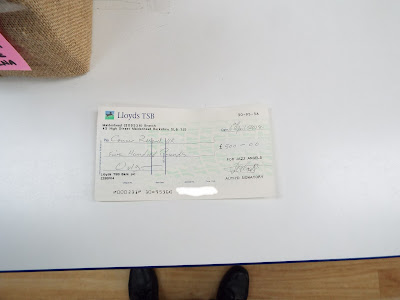 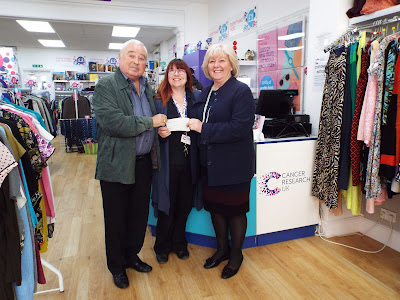 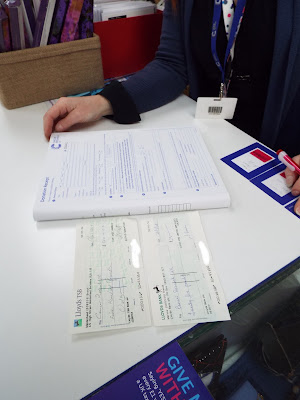 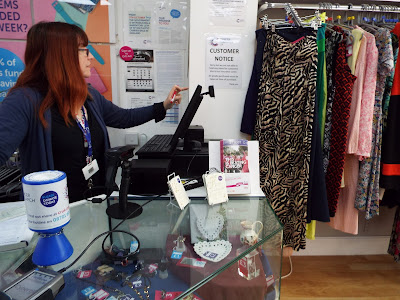 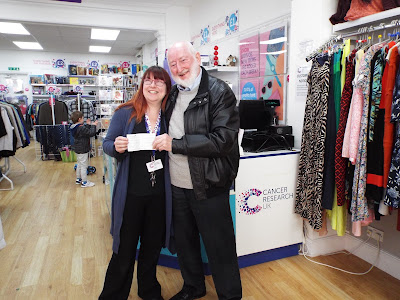 My Photos of the Cheque Presentation

I wont be with you this week, as another of the organisations I support is packing up donated computers for export to a village in called Nyaboo. I will be back for our guest the following week, because it is that lovely melodic saxophone player Robert Goodhew. He isn’t as well known as he should be, so do come along and get to hear what a lovely player he really is. 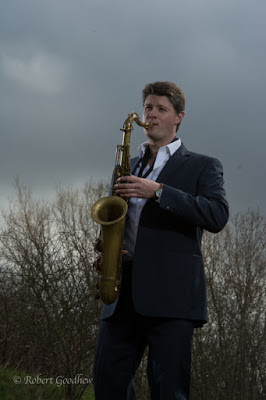 He will be playing in the main hall, not on the football pitch!


Posted by Geoff Cronin at 2:39 AM No comments:

Hedsor, and All That Jazz

After a bleak bank holiday, my blog will be shorter than usual. As Sir Michael Weinblatt would say, “lets get back to the jazz”, or in this case, recorded music of various kinds!

OK, this coming week, Thursday April 5th, to supplement the raffle we will have some music provided by American saxophonist (and until recently tutor at ) Frank Griffith. I believe the associates who will be with him are:

Mike Wills on more reeds, Ken McCarthy on keyboard, John Monney on bass, and Mike Jeffries on drums. Our regular percussionist and leader Martin Hart is taking a holiday in , which is much better than “The C & A of a Hospital”.
http://www.frankgriffith.co.uk/

The following week I will be busy crating up refurbished PC’s for shipment to . Some of you may know that I refurbish donated PC’s and laptops and get them over to a village in the called Nyaboo. And on Thursday 12th, whilst you all listen to our regular band (The Clive Burton Celebration Quintet) I shall be packing crates! I am told by the chief of that village (a royal of the house of the ) that those cast off machines now teach over 450 children a week from his community, giving them, in his word, “A positive advantage”.

I am delighted to announce that on my return to Hedsor on Thursday April 19th we will have with us saxophonist Robert Goodhew.

So that should keep you all occupied for a week or so.

You may recall that in last month’s Jazz Journal Simon Spillett wrote a wonderful tribute to Clive Burton (wasn’t his spoken tribute on Thursday last wonderful, Jazz Angels treasurer John Dutton actually became poetic about it, saying . “I was very moved by Simon's warm words in tribute to Clive. He is so eloquent and the words flow just like the notes from his Sax.”), so I decided that I should write a letter to Jazz Journal about that tribute, and about Clive, and this month it has actually got published, as did another from someone who used to come to both Fifield and “The Cookham Tavern”. Said person was also kind enough as to draw the world’s attention to my blog! Yes, fame (or notoriety) at last!

One final thought, don’t forget that Tuesday night, April 3rd, at Marlow Jazz you can hear a recreation of The MJQ. That’s at The Marlow British Legion Hall from