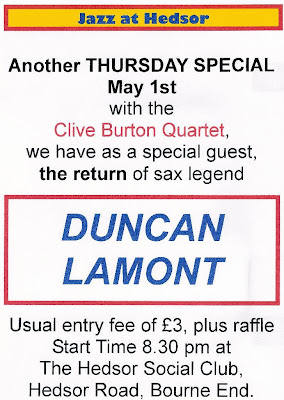 You will find above our advert for a return visit next Thursday, May 1st , by British sax legend Duncan Lamont.

Duncan is coming to play alongside our regular reedman Mike Wills for another special evening of quality jazz at The Hedsor Social Club. It starts at our usual start time of 8.30 pm, and admission is still a bankrupting £3. So why not come out and enjoy the music and the special atmosphere of Jazz at Hedsor.

I've been asked to mention another special event that involves local trad heroes, Cookhams fabulous Shirtlifters. "They are playing a number of local gigs around the Porthcurno area in Cornwall but the highlight should be the performance at the Minark Theatre on Sat 10 May evening weather permitting. It is an open-air amphitheatre on the edge of the cliffs - truly exceptional venue you will agree if you search/look on the net for 'Minark Theatre'. Normally they put on Shakespeare plays , Gilbert and Sullivan and the like as well as standard classical concerts by 30 / 40 piece orchestras. This is the first time hey have attempted jazz I think , so it's a bit of a try out you could say." For more details you could do worse than ringing the Shirtlifters titular head, Charles Benson on 01628 472163.

BUT, the place to hear jazz locally is still The Hedsor Social Club! Now a favourite riff for all who come on a regular basis
Posted by Geoff Cronin at 6:21 AM No comments:

"That was a Gig That Was"

And that was the email heading from Lisa Amato, telling me what a good time she had had playing at Hedsor on Monday last. And she was absolutely right. What a gig!

The Monday guitar night gigs have always been very pleasant affairs, great music, with just a handful of audience.

First off, an email form Lisa, telling me that the long booked Pete Billington was NOT going to be able to make the gig.

BUT, at the last minute she had managed to persuade British piano legend John Critcheson to come out instead. John hadn't been to Hedsor before, hadn't played with any of the other players before, and had never heard of James Fenn. Well, he has now. The combined talents of John, James, Lisa, Vasilis and Nick Marangoni produced an evening of magical jazz that, I for one, will never ever forget. Swing, sting (in some of the incredible harmonies concocted by James and Vasilis on the hoof), humour, and joy were all in there. And to a nearly full house, with new friends who had seen the posters!!They will all come again too.

I know John enjoyed himself immensely. And the audience had a wall to wall grin all evening. It more than made my day! I think it's made my year (my 70th on this planet).

The next jazz Monday is May 19th. I'll let you know the details of exactly who, but do expect many of the same to appear again. And all for your £5. That's right, just £5!

Coming more down to earth, we do have another session from our house quintet this week on Thursday. So to come out and support the live jazz music that we put on Every Thursday at The Hedsor Social Club.

Another Stella date for your diary, on Thursday May 1st, we have another visit from another British jazz legend, Duncan Lamont. He will join our regular reed corner man, Mike Wills for a tenor duo night. What more do you jazz fans want for your money? We don't do gladiators. So put it in your diary, and pay us a £3 visit.

Don't forget that coming up soon at other venues we have:

Saturday 26th April Martin Hart with Alan Barnes at The Woodley Theatre. A few tickets are still available. ring their box office on 0118 9690827. Price is £8.50

And on May 6th, Lynn Garner appears at The Wycombe Swan with American saxophone star Scott Hamilton.

That's it for now, I hope to see you soon at a gig near me!!

Geoff C
Posted by Geoff Cronin at 2:17 PM No comments:

Don't forget (and you may be late) that we have another magnificent Monday evening of guitar led jazz for you at THE HEDSOR SOCIAL CLUB tonight from 8.30pm.

All these star players will be yours (for an hour or two) tonight:-

PLUS there will also be previously owned CD's for sale at less than the entry fee each!
Posted by Geoff Cronin at 1:46 AM No comments: 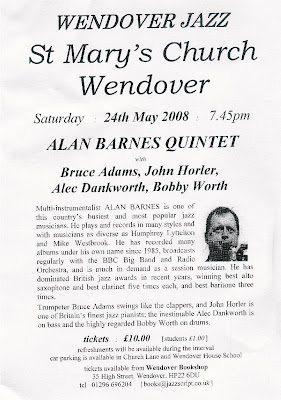 I just thought I would nag you again, to remind you that at Hedsor this Thursday we have a session NOT led by Clive Burton, BUT with such luminaries as John Rolls on sax, Tim Best on keyboard, Elliot Toms on drums, and the link to our regular band will be Ken Rankine on the bass. I still think there will be another instrumentalist there as well, but that could just be a tease!! The usual start time of 8.30 pm applies, as does the entry fee of £3 and a mandatory raffle ticket.

On MONDAY 21st, yet another super session that I have been trying to organise for a while. Some of you May like to come and join me in listening to guitarist James Fenn, with Vasilis Xenopoulos on saxophone,and piano player Pete Billington . Lisa Amato will be adding considerable visual attraction to the event (as well as playing very good bass), and we hope to have Nick Marangoni on drums as well. AND you only have to pay £5. That's it, only £5. We at least are trying to control the current world economic crisis. On the 22nd, if not enough of you turn up, you can come and help me control MY financial crisis!!

On Saturday 26th, there will be a Jazz Program at The Woodley Theatre, led by Martin Hart:-
Jazz at the Oakwood:
Alan Barnes
acclaimed sax star, backed by
The Martin Hart Trio
and featuring
Ken McCarthy - Piano

Recent CD Listen
I don't know about you, but I sometimes feel that CD's are too long! Yes, I know that you do need value for money and £12 to £15 is a lot of cakes, but the old LP did give you fairly convenient 20 minutes bite size listens. For me, this usually means that I rarely listen to a complete CD all the way through at any one session. BUT, one CD did catch me this week.
OK,so it was a lady singer (anathema to some of you), and she has got a slightly strange name. BUT she was born in Rochdale, and brought up in Stockport! She also has a very individual style, often likened to Nina Simon. Who am I blathering on about? Barb Jungr.
I started listening to her 2006 CD on Linn Records called "Walking in the Sun". 54 minutes and 42 seconds later, I stopped, because I had listened all the way through. Totally enthralling stuff. Full of passion and real soul. To some, it might not be considered jazz, if that is so, I wont apologise. Just get a listen to it and tell me you haven't had a musical experience.Titles include "Walking to Memphis", "Blind Willie McTell", "Many Rivers to Cross" and of course the album title song. Its superbly recorded,and its on Lynn Records AKD 283.
That's it for now folks, see you Thursday, or Sunday or Monday or.....but do turn out, or the music will stop! 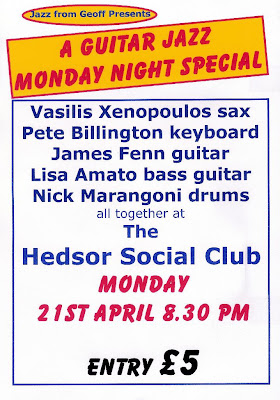 Just a few items of interest.

Last nights Hedsor session with the addition of Duncan Lamont was an absolute delight. It was apparent that the home team raised their game with such an illustrious guest with us, and it was obvious that Duncan enjoyed playing at Hedsor (but then most musicians do). I'm confident that he will come back.

Most of the gigs at Hedsor and Fifield in the next few weeks will have our regular quintet, with Mike Wills now playing for us regularly. There are a few occasions when he will be missing, and one occasion when the whole band will disappear.

At Fifield this Sunday (6th) the guest will be guitarist Max Britain.

On Sunday 13th April at Fifield the guest will be saxophonist Peter Cook.

On Thursday 17th at Hedsor the regular band will be replaced by John Rolls on saxophone, Tim Best on keyboard, Elliot Toms will be on drums, and the link to our regular band will be Ken Rankine on the bass. We are trying hard at the moment to entice another well known jazz musician to come and play as well, more on that later.

On MONDAY 21st we have a very special jazz guitar night. I have attached a file with a poster so you can all help in it's advertising. We are going to combine the talents of guitarist James Fenn, with not only Vasilis Xenopoulos on saxophone, but piano player Pete Billington as well. Lisa Amato will be adding considerable visual attraction to the event (as well as playing very good bass), and we hope to have Nick Marangoni on drums as well.

All that for fiver.

More info when I have it. Keep turning out and we will have to keep running live jazz. Stay at home, and so will all the musicians!! 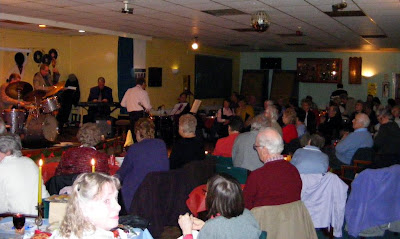 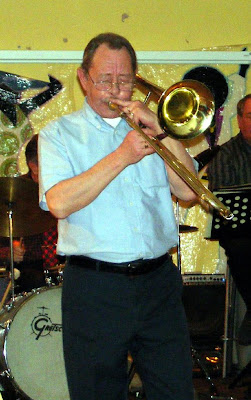 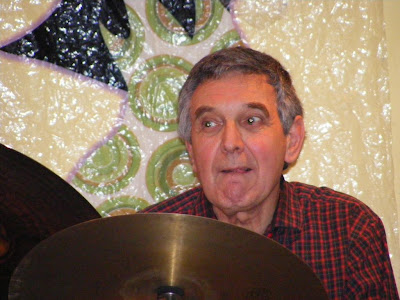 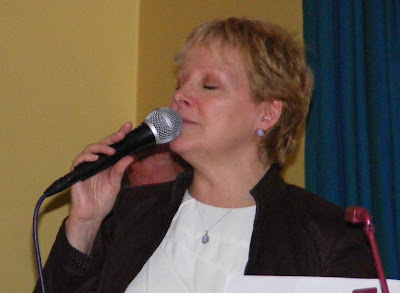 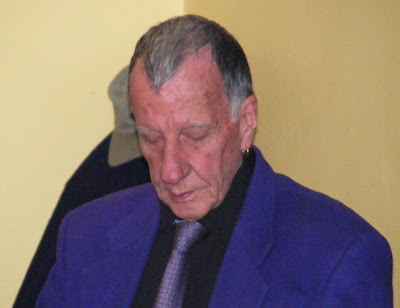 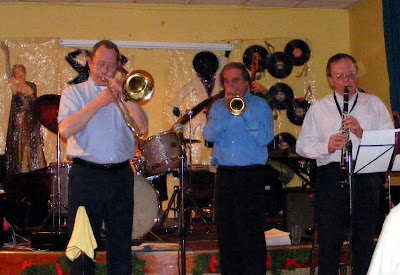 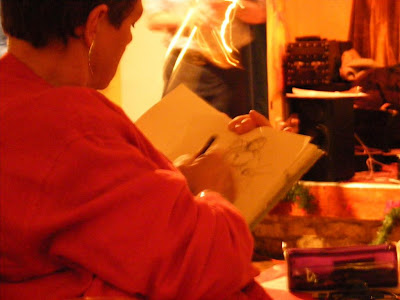 During last Fridays Concert I managed to take some photographs of the artists at play. I thought I would share some with you!
So far, we have raised, and will be able to donate to Cancer Research UK as a direct result of this event, over £900
A well done to everyone involved.