I’m writing today to nag you all about a few forthcoming live jazz events.

As you know, without an audience “live” jazz will die, and all we will have left will be impressions from the past, some of which many of us have collected over the years!

Forefront in my mind at the moment is Hedsor Jazz’s presentation this Thursday May 17th of The Remix Jazz Orchestra, led by trumpeter Stuart Henderson. This is a full size Big Band, which is something you don’t see very often these days. It is the first time Hedsor has hosted such a large ensemble, and I really do hope that you all turn out to experience the thrilling sound that they all make. If you have never heard a big band live before, you will never forget the experience. You can get a very small idea of what they are capable of by going to http://www.remixjazzorchestra.co.uk/home/audio-samples/  and having a listen, but it will be a small shadow of the live experience!

To add to Thursdays excitement, we have our regular Clive Burton Quintet. However, it will have a super guest, non other than the UK’s top tenor saxophonist Simon Spillett. We are charging £10 to get you in, it starts at 8pm, and once we have passed the 120 in audience numbers, we wont let you in! You can avoid this possibility by buying your ticket now from Cookham’s Stationery Depot in Station Parade, tel:-01628531178

But all of the above is just about this coming Thursday. If, for some obscure reason, you cannot make it, then the following Thursday you can come for half the price and listen to the Quartet with guitarist John Coverdale alongside Mike Wills.

Coming soon to a different place, on Tuesday 22nd May you can listen to singer Zoe Swartz with guitarist Rob Koral at Marlow’s British Legion Hall. This is one of Michael Eagleton’s many jazz presentations that have kept us all rich in live jazz for many decades. Whilst mentioning Michael, let me thank him again for allowing me on to his Jazz Show yesterday (on Marlow FM ) to plug this coming Thursday. It was great fun to do, and I will take him up on his extended offer of a further visit.

Jazz is a musical art form, but it is also entertainment. In the UK it seems to be treated like some third world religious movement. We are forced to use small venues, and we have little or no prestige to our chosen art form. In France it is regarded in a much higher light. In the UK there is small representation on any broadcast national medium. Perhaps we are too polite? 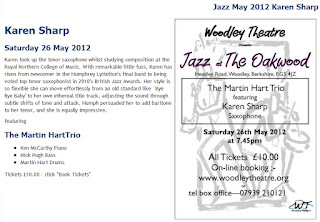 Another event, in a small local art centre, happens on Saturday 26th May, when the Woodley Theatre presents Karen Sharp with Martin Hart’s trio. If you can still drive in the dark, why not make for it. See artwork for details. She is another young up and coming (well, she has really arrived!) saxophonist, who was featured in the late Humphrey Lyttleton’s Band

OK, earlier in this blog I referred to impressions of the past that we could listen to. Well, nowadays they don’t all have to be on CD, or LP or tape or 78 even. You can download much of people’s musical activity and have it with you for future reference. 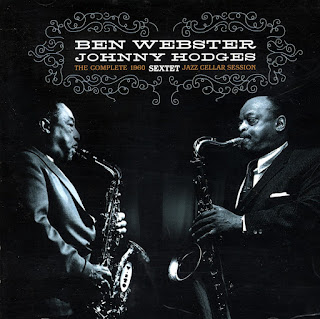 I have 2 CD’s that have come to me recently. One is very much from the past. For many 1960 is history. That is true for me, but I just happened to live through that decade as well! So it is memory as well as history. It was in the 60’s that I first heard Johnny Hodges and Ben Webster. Being truly patriotic in those days I did think Bruce Turner was better than Ben Webster! I was wrong, but not too wrong. Hodges however was a revelation. I played a track featuring him last night on Marlow FM (97.5 FM if within your range, or on line through http://player.marlowfm.co.uk/) but I have in front of me a reissue from 1960 of both Webster and Hodges playing together, with Lou Levy piano, Herb Ellis guitar, Wilfred Middlebrooks bass and Gus Johnson drums. Called (imaginatively!) “Ben Webster Johnny Hodges, The Complete 1960 Sextet Jazz Cellar Session” It is a worthwhile addition to anyone whishing to catch up on old releases. It’s on the Solar Record label number 4569895. It is delightful, relaxed swinging music by two giants of the saxophone. Well worth a listen, try www.discovery-records.com  for more details. 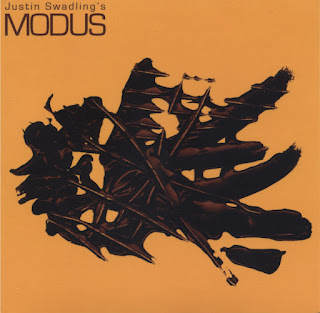 The other CD is by three young jazz musicians just starting out and  trying to make their mark. Two of them played for us a couple of weeks ago at Hedsor when we had Vasilis and Peter Cook with us as well. Justin Swadling is a saxophonist, Emily Francis is a keyboard player, and they have Liam Waugh on drums. Their CD promoting their band “Modus” is well played, very well recorded and thoroughly professional. It’s a little rock/pop edgy, and maybe doesn’t have enough variation in musical structure to keep a jazz fan amused at the CD player for too long, but I’m sure they would be very entertaining to listen to in a club. (I believe young people dance!!). You can listen, see (and sample) some of the sounds at www.justinswadlingsmodus.com . It is such young people that will take jazz forward after the time that we can, and they should have every encouragement to play live jazz to an audience of jazz lovers! I hope we can have them visit us at Hedsor again before too long.

Well, that’s it for now folks, play the cartoon tune!! See you at Hedsor.
Posted by Geoff Cronin at 9:05 AM