We Have Paid The Money

Yesterday, Dee, John and myself visited the Cancer Research Shop in Beaconsfield and presented them with a cheque for £325, the money raised from last weeks concert. The Beaconsfield shop had been most supportive of our advertising for the event. 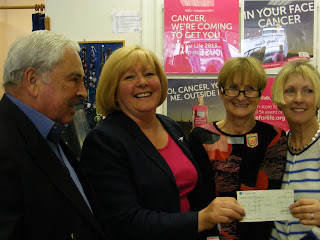 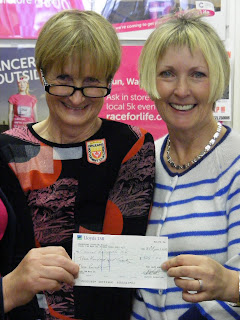 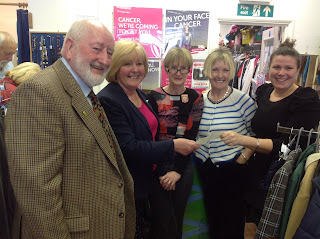 I know we all hope that although only a relatively small amount of money, it will positively help in the fight against cancer which has damaged almost everyone we know in one way or another.

A note about the coming Jazz at Hedsor. This week we have the Clive Burton Quintet, and On May 9th we have as our guest a young saxophonist, Justine Swadling, coming to entertain us. Justine is another of Britain's up and coming jazz musicians. It will be well worth your while coming to hear him.

Our guest in June will be none other than saxophonist Karen Sharp. Karen was "discovered" by Humphrey Lyttelton and played in his band for some years. She appeared in the BBC film "Humphs Last Stand" in a performance of the band at The Brecon Jazz Festival with Scott Hamilton as guest musician with Humph.
Having Karen with us at Hedsor will make it a very special night, so put it in your diary now. June 6th.

That's it for the moment, don't forget to tell others of the great live jazz being put on EVERY week at Hedsor Jazz, part of the Hedsor Social Club in Bourne End, Bucks.