This week we have as our guest at Hedsor saxophonist and bandleader Peter Cook. 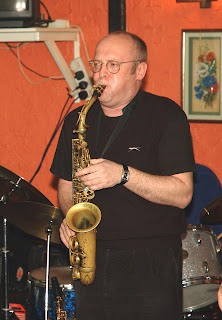 It’s been a while since he was last with us, and it will be great to have him combine his talents again with our illustrious Clive Burton and his quintet.

We start at 8.30 pm. Admittance is still £5, and has been now for the last 3 years. We hope, with your support, that this will still be sufficient this year to enable us to keep bringing you the best in jazz locally, which is not the same as the best in local jazz!!

Our typical guest list contains world-renowned musicians, and we hope that in 2012 we will be able to continue bringing you this quality of performer. You don’t even have to pay for parking!!

We do need an audience, and so do the other gigs and venues around, so if you are a jazz lover, keep coming out at least now and again during the year and do your bit to keep live jazz alive.

I mentioned last week the new album by young South London trumpeter Paul Jordanous. The artwork on this his first album under his own name as bandleader has refreshingly clean artwork.  I have now had a chance to actually listen to it!

It is a very clean and crisply recorded album of 8 Tracks, all composed by Paul, and played by some of this countries young and up and coming. Certainly Kit Downes on keyboard must be included in that description. He is after all a Mercury prize nominee!

The tracks vary in the number of players, giving slightly different aspects to the sound. It is nice to hear the vibes of Lewis Write featured on 4 tracks. It’s also nice to hear 2 musicians familiar from the Vasilis Xtet too in the shape (OK, it’s a CD, so that really should be “sound” of) Chris Nickolls on drums and Mark Rose on bass.

Added to this rhythm section are Piers Green on alto sax, Paul Booth on tenor sax, Tom White on trombone and Bill Mudge on keyboard whenever Kit Downes isn’t!

I first heard Paul a number of years ago at Swanage, and he has a rich tone and a great technique. Overall, I would place the bands sound as cool modern bop. They all seem to be college trained musicians, and perhaps the album does sound a bit like that, a bit too serious sometimes and just a bit like its all an exercise. I know I’ve written recently about the jam sessions of the late 40’s and how they swung, how they generated excitement sometimes by the use of space. They also often used popular tunes to start from (even if they did rename them). I noticed on Paul’s own Facebook page that his likes don’t include any musicians from the late 40’s or early 50’s. I hope he does at least have a listen to some of these, often self-taught, guys from the past. They didn’t all have the technique these young players have, but they gave of their own identity.

This is a good album of 21st century jazz. Perhaps sometimes it is just a bit too cold. Sample it and see what you think. A video link can be had at http://pauljordanous.webs.com/apps/videos/videos/show/14656450-paul-jordanous-ensemble

I think Paul, and the rest of the ensemble, are to be commended for following the star of jazz. It is still on the horizon to be followed! They have a lot of skill, and have obviously given a lot of their time already to the journey. They are not inexperienced, and it may well be that age will add the individual identity of sound that I feel is sometimes lacking in this first album.

hi there geoff.
yes ive been enjoying this new album from paul too. great blog you have up here.
Alex