Just a few notes for Hedsor Jazz this week

We now have almost a complete gig guest list for the rest of the year, and I will include the text of it at the bottom of the blog. If you come to Hedsor you can pick a printed one up.

As you will see we have our own Lester Brown on trumpet together with Robert Goodhew on tenor sax this Thursday. Last time they were together they produced some magical moments so it looks good for a reunion!

Our rhythm section this week will be undergoing a major change. Martin, our regular drummer and compere is away, and in his place we draw from our audience Mike Jeffries. Mike is a regular dep for Martin, and a regular member of our audience when not playing himself. He is also chairman of Jazz Angels, the local jazz support group.

On piano this week we have someone who hasn’t been to or played Hedsor before. Our regular Nigel is playing for a very special Christmas evening (already the C word!), and John Cooper is taking his Hedsor place. On bass we have Mr Steve Riddle who I am told has played with John before. So there should be harmony at the back to match the harmony at the front!

I wrote recently about how nice it was that John Jordan had managed to escape Wexham Park Hospital in time for his wife’s birthday, and John was with us again last Thursday. However the strain of passing over the cheque to The Thames Valley Adventure Playground was a bit too much and he has had to return to after the chest pains started again. A card wishing him well will be available for you to sign on Thursday. I know he has had a laptop with him (I was going to say “tablet” but that could be misunderstood in a hospital situation) as he has emailed me, so I will say to him from here “Get Well Soon John and as you have a bit of spare time do look up last weeks links to PMJ. Mind you be careful if you watch “Gunhild!”

Below you will find some of Geoff Swaffield photos of last weeks session with Duncan Lamont jr and Max Brittain. This was a lovely session which I sadly did not record. Hedsor Jazz is so lucky in having such wonderful players coming to play.

But they all need an audience…..that’s YOUR bit. 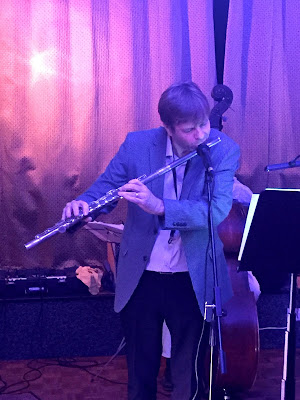 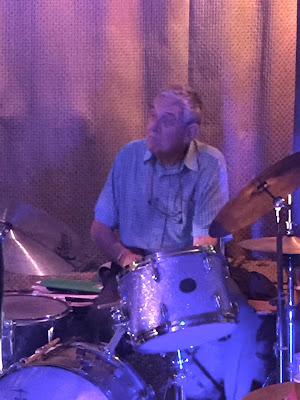 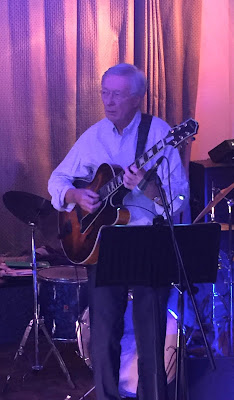 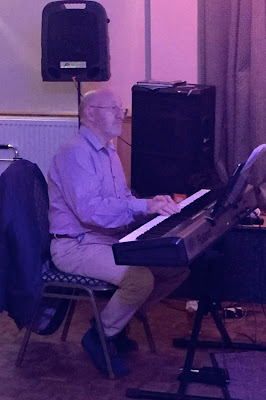 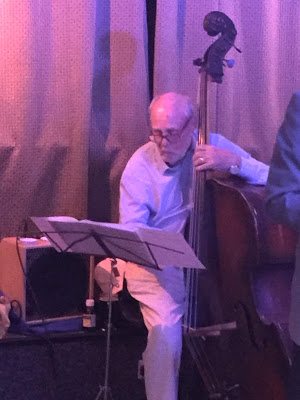 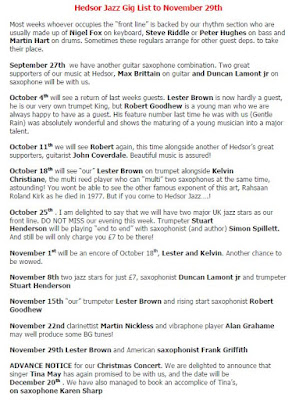 Most weeks whoever occupies the “front line” is backed by our rhythm section who are usually made up of Nigel Fox on keyboard, Steve Riddle or Peter Hughes on bass and
Martin Hart on drums. Sometimes these regulars arrange for other guest deps. to take their place.

September 27th  we have another guitar saxophone combination. Two great
supporters of our music at Hedsor, Max Brittain on guitar and Duncan Lamont jr on saxophone will be with us.

October 4th will see a return of last months guests. Lester Brown is now hardly a guest, he is our very own trumpet King, but Robert Goodhew is a young man who we are always happy to have as a guest. His feature number last time he was with us (Gentle Rain) was absolutely wonderful and shows the maturing of a young musician into a major talent.

October 11th we will see Robert again, this time alongside another of Hedsor’s great supporters, guitarist John Coverdale. Beautiful music is assured!

October 18th will see “our” Lester Brown on trumpet alongside Kelvin
Christiane, the multi reed player who can “multi” two saxophones at the same time, astounding! You wont be able to see the other famous exponent of this art, Rahsaan Roland Kirk as he died in 1977. But if you come to Hedsor Jazz….!

October 25th . I am delighted to say that we will have two major UK jazz stars as our front line. DO NOT MISS our evening this week. Trumpeter Stuart
Henderson will be playing “end to end” with saxophonist (and author) Simon Spillett. And still be will only charge you £7 to be there!

November 1st will be an encore of October 18th, Lester and Kelvin. Another chance to be wowed.

ADVANCE NOTICE for our Christmas Concert. We are delighted to announce that singer Tina May has again promised to be with us, and the date will be
December 20th . We have also managed to book an accomplice of Tina’s, on saxophone Karen Sharp

As I wrote above

But they all need an audience…..that’s YOUR bit.