Jazz from Geoff, THE blog, is coming early this week. I have been driven to write sooner rather than later because of a myriad of “other things” that will occupy me later, and THE RAIN!

Now THAT is a great tune:-

It was raining last Thursday too, and road works managed to delay many people arriving at Hedsor Club for the jazz session. It was, however, well worth the delay, and for some the long detour to get home again after the gig (another link there to “Detour Ahead”!).

The combination of Sue Greenway on saxophone and Simon Wilde on trombone was wonderful (another tune!). Simon had not been to Hedsor before, and he is a very accomplished trombone player indeed, who will get asked again. Sadly I didn’t record the session, managing even to forget to bring my phone! The camera however was with me, and my photos of the evening are below. 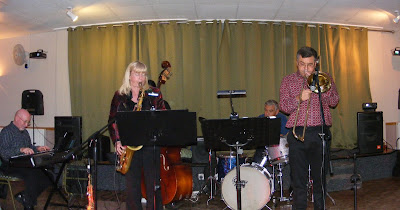 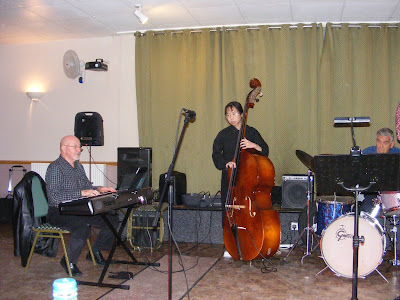 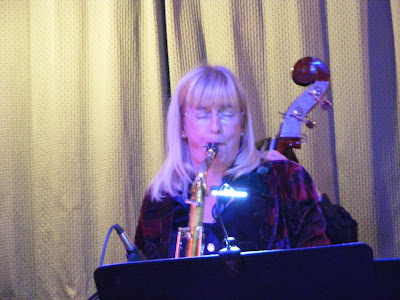 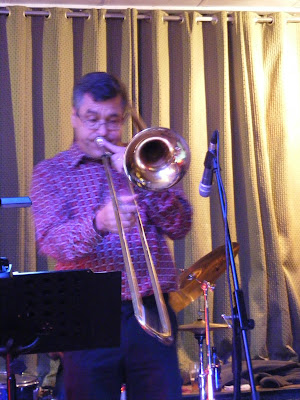 If I had recorded it I could be reminded of all the tunes and all of the harmonies and the general flavour of oneness that this session generated.

It was also raining on Saturday when I travelled to Woodley, near Reading, to listen to The Martin Hart Trio with trumpeter Ian Smith.

The trio, in case you haven’t been to one of the sessions run by Martin at Woodley’s “Oakwood Theatre”, consists of Ken McCarthy on piano, Nick Pugh on bass and of course Martin on drums.

Ian Smith you may have heard at Hedsor, and on December 5th you will be able to hear him at Hedsor again. He is a superb trumpet player, lecturer and writer on jazz subjects. His playing style isn’t flashy or florid, and he plays all the right notes with great accuracy. He isn’t loud, and usually doesn’t like to use amplification. He has in the past been involved with some very avaunt guard jazz groups, but his style seems more traditional than that, perhaps more rooted in the small swing group traditions of the past. He is an excellent listen so DO put his next Hedsor date in your diary.

In the meantime why don’t you listen to him talking with Kenneth Clark MP about trumpet player Lee Morgan. Follow the link below, and if you are not already signed up to BBC’s Sound Service, sign up, log in and listen to 1/2 hour of the best of Lee Morgan and some interesting conversation too.


Coming to Hedsor Jazz NEXT WEEK (October 17th) we have “our” trumpeter Lester Brown together with “our” reed section Mike Wills. Nigel isn’t able to be with us on keyboard next week, and Ken McCarthy is being paid to go on a cruise, so in their place we have that tall Irish piano player JOHN DONEGAN. I know a number of Hedsor fans have wanted to see and hear him again, he was last with us as the piano man with guitarist Nigel Price. SO this time you can hear him with a more regular jazz lineup. However do ask him about his recent CD “Siamsa”. The music is based on his Irish Roots, and is a great listen.

The other day I had reason to rummage around in my reserved CD collection, the ones you listened to a few years ago and then put to the back (bad practice, they should be in alphabetical order! I do slap my own wrists) and I came across a recording originally made and released on LP in 1977 then re-released (with additional out takes) on a CD in 2002. Its by another pianist that I had seen a number of times before, John Bunch. An American who hasn’t really ever had the fame that some American pianists have had. He is (rather was, he died in in 2010) rather neglected in my view, and my re-find is well worth a search and a listen, because on this CD release he is with tenor saxophonist Scott Hamilton and trumpeter Warren Vache, Michael Moore on bass and Connie Kay on drums. Superb mainstream jazz, recorded when both Scott and Warren were at the peak of their form, young men making a name for themselves. Some great tunes too, the kind I can never remember the titles of when asked about off the cuff! My copy is on Progressive Jazz PCD 7134. If you search Ebay, there are still copies out there. Cover art below.

intelicle said...
This comment has been removed by the author.
12:06 AM

We serve a diverse range of public and private sector businesses, providing bespoke packages of hard and soft facilities management services on a national basis.