Another week, and another blog from Geoff!

In last week’s blog I copied in the tune listing of a gig from a couple of weeks previously. Inadvertently I left in a comment made by the person (even I don’t know their name) who supplied the information. It caused an interesting comment from “our” keyboard man, Nigel Fox which I thought quite interesting and worth sharing.

Us non players often use inaccurate descriptions of musical sounds, rhythms and even instrument names. Some of us are better informed than others, at least I can tell a trombone from a trumpet, but I thought I would quote from Nigel's email to me.

Nigel emailed me to say “I only had my normal Roland FP2 sample of an acoustic piano not a Fender Rhodes! I occasionally use the Vibes and Hammond Organ sample but not the Rhodes as it doesn’t sound very good!”

So now we know! I wonder what actual train Zane’s keyboard used as a sample for the occasional times he used a train sound? Probably a South African one!

I will still try and add in gig lists when I can get hold of them, but I will also try and read them more thoroughly myself before blogging them out!

I am amazed at how good electric keyboards now sound and can clearly remember how bad some of the “real” pianos did sound in the days of the house pianos. Some were so badly out of tune that they were virtually unplayable. I can remember Fred Hunt of The Alex Welsh Band of the 1970’s trying to play the piano in Maidenheads “The Bell”. In the end he gave up! Most of the gig was then piano less!

Last week at Hedsor Jazz we were nearly piano less ourselves. Sadly Ken McCarthy was unwell, and eventually decided that he wouldn’t be able to be part of the tribute to saxophone led bands that we had at Hedsor last week. So with only 4 hours notice I think we were all very grateful that Martin Pickett was able to help us out on his keyboard, on which, if my memory serves me, he only used a piano sound! I don't think he had been to Hedsor Jazz before, so well done and thank you. I hope you enjoyed the Hedsor Jazz experience.

Martin P. did incredibly well, as all the tunes were arrangements, and unusually for us, every tune and every player had a chart to read. Mike Wills and Sue Greenway made a splendid noise. No that isn’t disrespectful word to use as the two tenor players blowing in harmony DID make a splendid noise. The tunes played, my helpful scribe informs me, were:-

During the evening Sue and Mike often managed to bring to mind the sounds, yes the actual sounds, of Johnny Hodges, Paul Desmond, Gerry Mulligan, Zoot Simms, Al Cohn and Tubby Hayes, but not necessarily in that order!

My photos (without feet or shoes) are below. 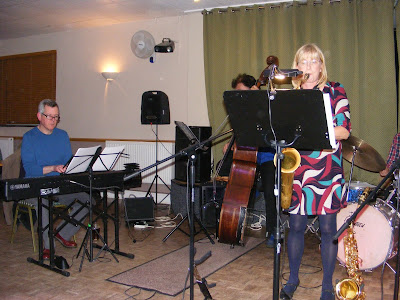 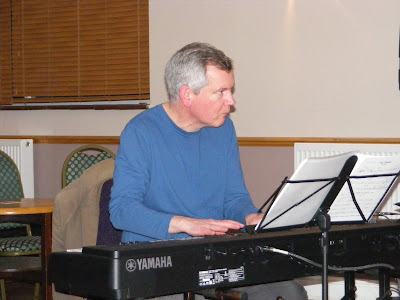 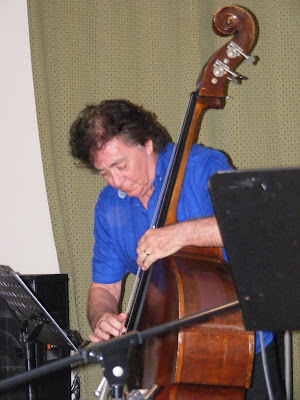 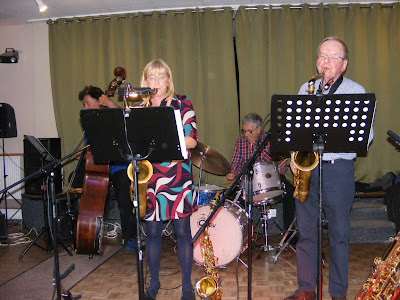 Coming to us this week (Feb 6th) we have two young players (most people under 81 are young to me!) who now play together fairly often. Maybe we were catalysts in that, I don’t know ,but Lester Brown (trumpet) and Robert Goodhew (tenor sax) have been to us fairly often in recent years and now do a fair bit of work together. Lester, as you must know by now, is a regular part of “The Clive Burton Celebration Quintet”  and Robert was introduced to us by Clive himself, who often used to encourage him by inviting him to play whenever he could.

With them this Thursday will be Nigel on his Roland FP2 acoustic sample keyboard, Martin Hart on drums and cymbals various, and Roger Davis on bass.

Do look back on previous blogs for a complete listing of who is on in February and March. In the meantime I will just have to sign off for this week.