But also a sad day, full of happy memories of our son Stuart, who would have had a 54th birthday today!

So, to start today’s jazz nag, let’s look forward to this Thursday, the 13th of Feb. We have that lovely saxophonist, last with us at our Christmas party, Duncan Lamont jr. on reeds and with him will be the wonderful sound of the trombone again, this time played by Nick Mills. Our bass player will be Peter Hughes (who will be playing on the following day for the “Echoes of Swing Big Band” at Cookham Rise Methodist Church, see a poster below). On the sampled keyboard (also see last week)will be Nigel Fox, and on drums our own Martin Hart.

Well, really, they are all our own, as we are all a part of that great jazz fraternity and they have ALL have played for us at Hedsor before. 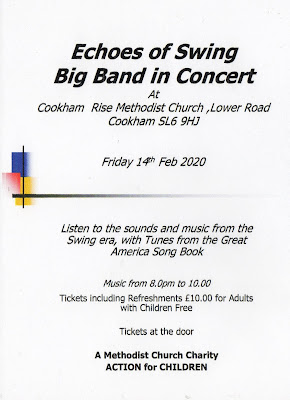 Last week we had some beautiful music played by Lester Brown on trumpet and flugel horn, and Robert Goodhew on tenor sax. Roberts 11 minute rendition of “Early Autumn” in the second half was heart rending and so well phrased you didn’t  want it to stop. He really does deserve more recognition than he gets.

We first heard Robert when he was brought along to one of our Thursday sessions by Vasilis Xenopoulos just to sit in. At that time they were both in the Ealing based big band “The Sound of 17” as was our bass player at the time, Ken Rankine. I know Clive Burton tried to encourage Robert as often as he could as Clive appreciated his ability. We are privileged to have people of that calibre coming to play for us. My photos of the last Thursday’s evening are below. 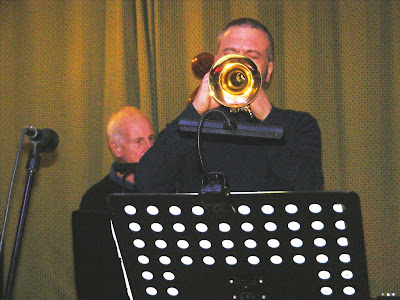 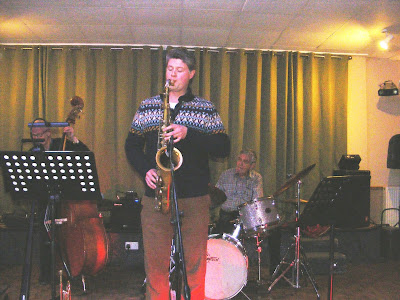 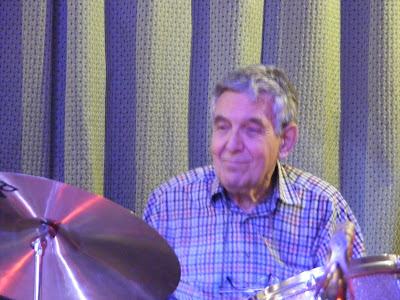 Because of today’s significance to me, I have been looking backwards, and as this is a jazz nag, I have looked back on my jazz past.

Some years ago, I was invited to a U3A gathering in Amersham to talk about “My Journey Through Jazz”. Sadly I have lost my script for this talk, BUT I still have the compilation CD’s that I produced to accompany the it.

My first track in the second half was from a 1953 album by trumpeter Freddy Randall, “Riverside Blues”. My love of jazz came up through Dixieland and traditional jazz, and Freddy Randall had one of the early commercial bands playing in that style at the time. He was a punchy trumpet player, and as I was attempting to play the trumpet at the time, I enjoyed the occasional broadcast and I also had one or two 78’s of his band. Not quite hidden in this recording though is someone I followed keenly ‘till his death, saxophonist Bruce Turner. Maybe I will write more about Bruce at a future time, but if you don’t know of his work with Humphrey Lyttelton and His band, or with his own “Jump Band” do use your search engine to find out more. I know I went on to play one of my desert island disk choices during that talk, Bruce Turner playing “St. James Infirmary Blues” from the LP “Humph at the Conway”. I know I got through 2 LP’s of that concert and now have it firmly on CD!

Also played by me at that talk was what would have once been a familiar sound in New Orleans “back in the day”. The street cry of a man selling water melons from a barrow!  I also played Herbie Hancock’s version of “Watermelon Man”. Well, inspiration usually comes from somewhere!

More reminiscing another time, right now I can hear the cry of the coffee lady!

If you want to and have the technology, you can sample 3 of the recordings mentioned above through the links below to my DropBox folder:-

Enjoy the past, but make sure of the future of Live Jazz,
become and audience!