How did you all get on with Eddie Condon? In last weeks blog I put in a link to Eddie Condon’s 1940’s broadcasts. 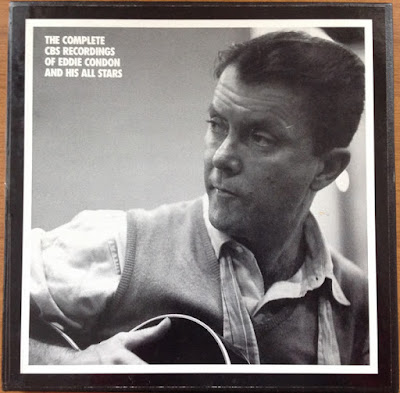 Reading some donated magazines this past week I came across this, which may help you understand a bit more about Eddie Condon.

If you're not familiar with the music of Eddie Condon, now is a good time to check him out!
Eddie Condon was a jazz guitarist who seldom took guitar solos. He did not sing and only wrote a couple of songs. But, despite that, he was one of the most important figures in classic jazz.

He helped form and formalize what came to be known as Dixieland, even though he never liked the name. Dixieland music carried some negative con­notations when played by white musicians.

What he believed in was old-time jazz, the brash and exuberant kind with some of the "bark" left on it. Jazz that came origi­nally from New Orleans by way of Chicago, Kansas City or Detroit.
Condon once gave a colourful descrip­tion of the excitement he felt as a youth when he hung around the Chicago joints where the New Orleans jazz masters played. "Notes I had never heard were peeling off the edges and dropping through the middle; there was a tone from the trumpets like warm rain on a cold day," he said. "That music poured into us like daylight run­ning down a dark hole. The choruses rolled on like high tide, getting wilder and more wonderful."

Condon quit high school early and joined Hollis Peavey's Jazz Bandits to play Odd Fellows dances in Chicago and one-night stands in lakeside dance pavilions in Iowa, Minnesota and Wisconsin.
For the rest of his life, he remained loyal to hot jazz. He said, "Hot jazz was the child of ragtime, with some of the bristle left in."

Eddie Condon stood up for the traditional music that he believed in. He made witty comments.

Music has always had the purpose of helping us get through our day. Jazz continues to sweep us up and shake out the bad stuff.

Somewhere, I once read, "When you bring New Orleans your sad story, New Orleans will put a beat to it."

This was culled from an advertising article for “The Dirty Dog Jazz Cafe” in the September 2019 edition of the American magazine “Downbeat”. The original text is attributable to John Osler.

Not on the recordings from the 1940’s, one of the best examples of the Condon style produced, I think in 1955, was “How Come You Do Me Like You Do”. It lasts nearly 13 minutes, and some of the players are introduced by Mr Condon himself together with occasional comments on their performance!

In last weeks link ( http://tinyurl.com/bao26ea ) there are 50 or so ½ hour broadcasts. If you do click the link, you can save the file, and convert each file into CD’s (2 broadcasts per CD). Most PC’s have the ability to burn CD’s and there are a number of online and free bits of software that will enable it all to happen. Try Ashampoo Burning Studio Free.

In this weeks blog I am placing another DropBox link to a CD of music that I got from the late Ken Rankine.
Ken was one of the founding players at The Ealing Jazz Festival, and in 1985 played a set with some names that you will know. Some from Hedsor, and some from other jazz venues! The session was recorded by the sound engineer, and Ken had a tape of that performance. I turned it into a CD some years ago, and think now would be a good time to let more people hear it.

The titles and performers are listed in a file alongside all the music, all you have to do is download and play that music:-

In 1985 I was at The Brecon Jazz festival in August, and had the late great Slim Gaillard lean on me to help him down the stairs on to the stage! Veroony! 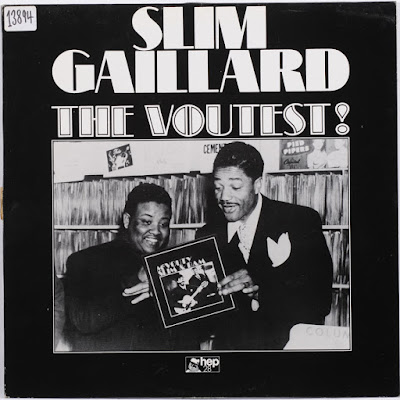 I have never forgotten that one of the local dignitaries welcoming everyone to the festival called him “Slim Whitman”, upon which he really broke up! Ah, the days when I was young!

Well, that’s it for now. Keep playing the music. One day we will meet again.

Then we will make Jazz Live again.