Another Tuesday, another blog for you to read.

This one does contain some sad news.

Long time Hedsor Jazz supporter and Jazz Angel John Jordan died of Coronavirus 19 last Wednesday, April 23rd. He had previously attended Wexham Park A&E for his known heart condition, but sadly on returning home he became unwell and was transferred back to Wexham Park hospital where he died a few days later.

I am sure all of you would like to express our sympathy and sadness at their loss to wife Joan and daughter Mandy. Normally I would let you all know when the funeral would be, but in these difficult times that event will be limited to only 10 people anyway. I will pass on the date when I get it for you to think of him at that appropriate time.

We do live in very difficult times, but I do intend to keep nagging on about jazz, and to keep providing links to the music that you can listen to or add to your own collection with via the pages of this blog.

One of our Hedsor regulars has emailed me to say what he has been doing with his socially distancing time since we last met. What he wrote is:-

Geoff
I've been binging on the latest Harry Bosch series on Prime and tonight got to episode 10. Harry (or his creator Michael Connelly) clearly likes jazz as Harry was playing this on his old fashioned vinyl player. As you know Pepper was another troubled character but the music is still wonderful.

He had previously mailed me about the death of Lee Konitz:-

Did you miss the passing of Lee Konitz on 15 April from the virus in New York.  I’ve spent some time this last week listening to some of his stuff and while I was never a great fan there is some good stuff on You Tube.  He was also a bit of a comedian in front of the audience and it looks as if he wouldn’t stop talking sometimes.

Now some new avenues for you to research.

I have been re investigating some of the earlier forms of jazz, mainly triggered by my mention of Jelly Roll Morton and my purchase of the JATP 10 CD set from the 40’s and 50’s the other week.

I know I linked to Jelly Roll’s version of Buddy Bolden’s Blues from the 1938 library of congress recordings he made with folk historian Alan Lomax, but he did make some more recordings with and without fellow jazz musicians before he died (in 1941). He made 25 more titles for the General record label, mostly all issued on 78’s and about a year after he recorded (for Alan Lomax) the library of congress recordings.
These last recordings have all now been gathered together on one CD called “The Last Sessions” and they can be found on “Commodor” CMD 14032. You may have to search for it as my copy was issued in 1997. You will find a slightly different version of Buddy Boldens Blues here with references to both a notorious law enforcement man (Judge Fogerty), who made miscreants sweep New Orleans streets as a punishment, and a reference to Bolden’s trombone player Frankie Dusen. If only we could hear today what that band sounded like!

Jelly Roll Morton was only 51 when he died. He suffered for a long time before with a version of Asthma which was thought to have been caused by a violent attack on him made in a nightclub, where he was stabbed in the head and chest. The asthma weakened his heart (according to his wife) and he died of his heart condition. His condition may have been assisted by his previous lifestyle, I’m sure being the piano player in a brothel may have had its health risks.
He was without doubt a remarkable musician, and one has to wonder what might have been jazz musics outcome if he had lived into a more modern era. These last recordings of his solo piano do reflect some of that brothel style (I am told!). However the group tracks on this CD do not adequately reflect the kind of music he was making in 1926 Chicago with his famous Red Hot Peppers, but they are a great piece of history. 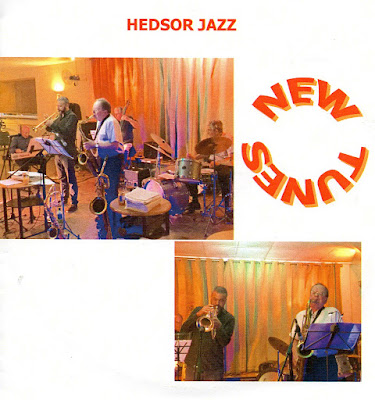 More modern history can be found back in 2018 when The Clive Burton Celebration Quintet played us some New Tunes at Hedsor Jazz. These were recorded on my mobile phone, in glorious mono, and you can revel in the nostalgic memory of that evening by visiting and downloading the files from my DropBox folder

When you get to track 11, you will realize that there is an error in the label for the titles on the sleeve, but you can never have perfection! Just enjoy the music, because that’s pretty good.

So until I write some more, be good, stay safe, wash your hands, and we will meet again.

PS, Once again I have no idea why blogger.com changes the background colour sometimes without editorial direction!