I thought I would bring to your attention today that we have a super guest for this weeks Hedsor Social Club Gig on Thursday.

Guitarist John Coverdale will be with the Clive Burton Quartet (Mike Wills being away this week, we did have a note from his mum). John is a tutor at Eton Collage, and played the guitar for the film "Evita".

I think the quality of our regular team is a big asset in bringing in pedigree artists from outside the local level. Hence our ability to see and hear such people as John this week, Simon Spillett and Don Wright last week. All this for your £3 entry fee, and the fun of a raffle. So, if you truly love jazz, don't miss out, it all starts at 8.30 pm. every Thursday at THE HEDSOR SOCIAL CLUB!

There may not be a film made about the venue, but shortly there may be a new CD to buy of the band!! Watch out for further announcements.

My commercial CD revues later again in the week, or early next week, but I need to get THIS message to your eyes asap!

Jazz from Geoff
Helping to keep live jazz alive.
Posted by Geoff Cronin at 1:39 AM No comments: 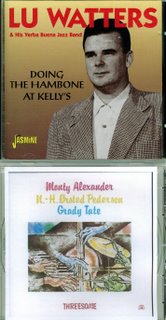 With the bank holiday looming, I thought “now’s the time” to give you all a short reminder of local jazz events, but starting with a brief revue of last nights Hedsor gig.

For 2 weeks running now we have been subjected to ridiculously marvellous music at The Hedsor Social Club. Last week I was not alone in thinking that Simon Spillett and Mike Wills had produced a miraculous evening of top quality live jazz. Last night was surely going to be an anticlimax wasn’t it? No two weeks could be on such a high could they? Wrong! Last night, not only Simon Spillett, this time with our regular answer to Vic Dickenson (Clive Burton), but a special surprise visit by another great tenor player, Don Wright. Don runs a 10 piece band called “The Wright Stuff”, has a great CD out with the band, and plays with a great big sound. Two tenors, a trombone, and our usual rhythm section again produced cheering crowds. So you weren’t there!! Gosh!! How sad.

Next Thursday, who knows, but we should be back to the normal line up, which is too good to miss anyway! 8.30 pm start £3 to get in, raffle to get out!

We also had with us last night a number of Cancer Research UK representatives, who came along for a photo opportunity (!!) to enable me to be photographed giving them the cheque for the May Concert proceeds, (which of course they already really had). Look out for it in a coming edition of your local paper!!

CD’s to listen out for:-

This week I have been captivated by a totally different form of jazz music to that which I usually write about. In the very early 1940’s on America’s West coast, some of the dance band musicians were getting bored with playing the same tunes night after night, and got together to research some of the earlier jazz that had become unfashionable. Lu Watters formed his first Yerba Buena Jazz Band to play a form of what we called “traditional jazz”. WW II” came along, and put a temporary stop to their fun, but in 1945 they again reformed and started playing regularly in public. The recording to which I refer comes from a late period series of recordings (1949/50), made at a club called “Hambone Kelly’s”. An all white band playing trad on the West coast inspired many British bands in that period (including The Yorkshire Jazz Band), and that inspiration can be heard on a Jasmine CD called “Doing the Hambone at Kelly’s”. I had often wondered where the early Lyttelton Band had got “Ace in a Hole” from, now I know. There is some wonderful liquid clarinet playing from Bob Helm, some terrific piano from Wally Rose, and Clancy Hayes both sings and plays the banjo. This is not just a fun record, it’s a great jazz listen. Tunes include “Emperor Norton’s Hunch”, “Alcoholic Blues”, “Roll, Jordon Roll” and 17 other trad tunes, some of which are very rarely played today.

TTFN, keep it live!
Posted by Geoff Cronin at 3:08 AM No comments:

Following on from my nag/blog today, one of the fans who WAS at the Hedsor Social Club last Thursday wrote back to me with the following:-

"Hi Geoff, Thanks for the JazzNag, and what a blast Thursday night's sessionturned out to be. Magnificent, - Simon with his more dynamic attack and Mike'slyricism complement each other beautifully.Zane as usual played brilliantlyand Ken (I think) played out of his skin. I can't seem to impress on myguests (who like the jazz very much) just how fantasticly lucky we are towitness such talent in such an informal setting at such a reasonable price!"

So, if you missed it you only have yourselves to blame!!

Geoff C
Posted by Geoff Cronin at 12:26 PM No comments:

Just a little reminder of the guest list for the next week.

On Thursday 24th August Clive will be joined by Simon Spillett. At The Hedsor Social Club

and on Sunday 27th August at Fifield the band will have Mike Wills as reedman.

Anyone who was at Hedsor Last Thursday will be aware that we had a remarkable session with Simon and Mike fronting the rhythm section, and it was some of the best off the cuff jazz I had heard for years. It was absolutely the right night for me to invite along two visiting American friends who normally get there live music from Boston’s Symphony Hall, and they were on their feet at the end. It seems that most of the rest of the audience thought such excellence was just routine, and didn’t join in in giving the musicians a standing ovation, but they really had earned one.

For those of you who weren’t there (fortunately we did have a bigger than usual crowd), I can only feel sorrow that you missed out. And you really did.

Jazz being what it is, a live art, I can’t promise such an extreme high for next Thursday, but this doesn’t mean that it won’t happen again. So if you value your jazz health, come and see!!

Simon Spillett is becoming more and more at home and relaxed with us at Hedsor, and it shows in his playing. I said to Clive a month ago, Simon is now a member of the band, he fits in so seamlessly. He has the skill and opportunity of playing with some of the UK’s best players, and yet we have the great good fortune to see and hear him in Hedsor’s small bar room. At just £3 entry, it must be the biggest bargain in British jazz.

On the CD front, I haven’t had the opportunity of a steady listen as I have had another of those time spans when I have been dotting about the country.

But I did get the chance to listen to a CD by a lady singer I didn’t know. Nicki Leighton-Thomas has recorded an album called “Forbidden Games” (I nearly typed in “Mind Games” in error, but that’s the great new CD by Martin Hart). The lyrics are nearly all by Fran Landesman, and the music by Simon Wallace, who does the accompanying piano parts. Taking solos at various times and tunes are Dave O’Higgins, Paul Stacey, and Steve Waterman. Very good music, and very,very thought provoking lyrics as you would expect from such a poet as Landesman. This is out on Candid Records CCD 79778

Another album much enjoyed (to the chagrin of all those out there who hate singers) was from Dianne Reeves. An album that most jazz fans probably won’t find, as it’s the sound track from the film “good night, and good luck”. All of these tunes are well known from the 40’s and 50’s, and include “Straighten Up and Fly Right”, “You’re Driving Me Crazy”, “Too Close For Comfort” and a number equally well known tunes. Very well recorded, and being a film score, lots of musicians are involved, but the core muso’s are Matt Catlingub tenor and alto sax (very good), Peter Martin Piano, Jeff Hamilton Drums and Robert Hurst Bass. As usually, if you are reading the blog, the artwork for these albums is visible!! Concord Jazz 0013431230724 is the number, but God knows why!

But for now, it probably is “good night and good luck”,

Geoff Cronin
Jazz from Geoff
Posted by Geoff Cronin at 3:54 AM No comments: