First, news of Clive. Those who were at Hedsor last week will have heard that he had had a fall. I spoke with him on the phone yesterday, and he has actually fallen down stairs, hitting the wall at the bottom, and he is very uncomfortable in a lot of very bruised places including bed! I’m sure everyone wishes him a very speedy recovery.

In the meantime, this Thursday we have a definite from Stuart Henderson on trumpet and flugel horn, and we are hoping to get his saxophonist companion “Tolly” to come and keep him company. Mike Wills is moving house! The rhythm section is slightly modified as well, Steve pickings will be on bass and Mike Jeffreys on drums. Nigel Fox is on keyboard I think!

Looking back on last Thursdays modified band, I thought it all worked out rather well. With Simon Spillett leading from the front on tenor sax it was always going to be good. Our regular saxophonist Mike Wills and our regular keyboard man Nigel Fox played as well as ever. Peter Hughes on bass in place of Ken Rankine meant that the bass section was still top rate, but our advertised drummer who was depping for Martin Hart (on holiday), was replaced by another dep. All the way from Fleet in Hampshire we had a first visit from John Nettle who did a very fine job and still made the 30 mile drive home! Well done everyone.

We are now in a position to sell you tickets for our Christmas Party, in the big room at Hedsor. These will cost you £10 a head, and we are hoping to gather a stellar cast to perform for you. Without doubt, with a buffet included, it will be a great night of preparation (if you need any) for the Christmas festivities. Tickets from Hedsor on Thursdays, or from Cookham's Stationery Depot tel: 01628 531178

Listened to This Week

Mention of Christmas brings me to one of the CD’s I’ve listened to this week. I have always enjoyed Stan Tracey’s music for “Under Milk Wood” that he recorded in the late 1960’s, and it became even more enjoyable when he started performing it live with the Dylan Thomas words added in by an actor. Now he has just released another Dylan Thomas inspired work, “A Child’s Christmas in Wales”. It is completely magical, and blew me away. With Stan on piano, he has Simon Allen (who came up through The Berkshire Youth Jazz Orchestra, now known as Pendulum) on tenor sax, Andy Cleyndert on bass, Clark Tracey on drums, and the poem is narrated by Stan’s grandson Ben Tracey. It is wonderful and magical and another masterpiece for sure. It can be obtained from Resteamed Records RSJ 111 www.reSteamed.com 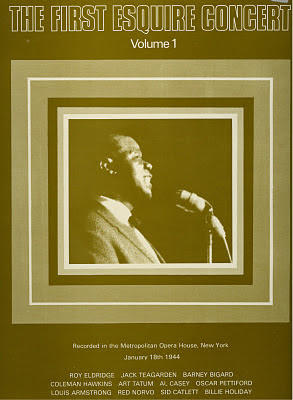 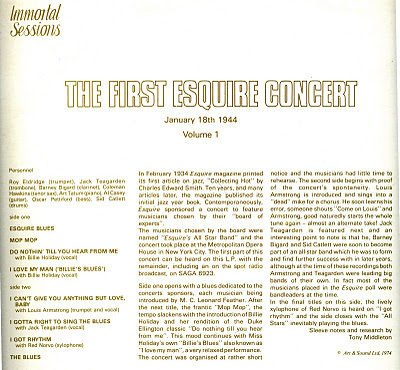 I have had great fun recently resurrecting some of my old LP’s. Having digitised the “Just Jazz” concert from 1947, commenting on the way about how well they could all swing, even at very slow tempo’s, I turned my attention to an LP of the First Esquire Concert, performed in New York’s Metropolitan Opera House in January 1944. It’s a very scruffy recording, but with a couple of real high spots.

We have on two tracks, Billy Holiday. On both Ellington’s “Do Nothing ‘Till You Hear From Me” and on her own “Billie’s Blues” I was again captivated by her. A legend, yes. We all know how good she was, but I wonder how often now we actually listen to her recordings. When I do, even after a period of months, I am amazed by the emotion, pain even, in her voice. “Billie’s Blues is straight from her inner soul.

The lineup around her is also astonishing to us now, but Roy Elderidge, Jack Teagarden, Barney Bigard, Coleman Hawkins, Art Tatum, Al Casey, Oscar Pettiford and Sid Catlett are the band, and Louis Armstrong is a guest. I only have volume one, an LP issued in 1974. Hi Fi it aint, but JAZZ it is.

Posted by Geoff Cronin at 12:59 AM No comments:

This Week at Hedsor Jazz

What I hope wont be like last week is the audience! Not enough of you turned out to welcome “back” our trombone blowing leader from his bed of back pain. This week, he will be fitter than ever, so come and find out. Please!!

Music Listened to this Week

Following on from my theme of Swinging 40’s and 50’s music from the “Just Jazz” stable I have something old, and something new (er). Having just written that down, it has also reminded me that once there was an LP released by the De Paris Brothers New New Orleans Band entitled “Something Old, New Gay , Blue”. They had no idea what the word “gay” was going to come to represent, they just meant it was “tres jollie”.

Old, in as much as it comes from the 1950’s is a super reissue on the Avid label of 3 LP albums headed up by Lionel Hampton. Lionel came to fame with the Benny Goodman Quintet of the late 1930’s, and in 1955 a film was made called “The Benny Goodman Story”, and much of the earlier recorded work was re created for the film. To free themselves form the constraints of film recordings, Lionel got together with Gene Krupa and Teddy Wilson in another studio to make an LP of their own. They added in bassist Red Callender and remade some of the earlier hits, this time without Mr. Goodman! So, on the first part of this new Avid double CD reissue we have “Avalon, I Got Rhythm”, “Moonglow”, “Just You, Just Me”, (still very popular, obviously, in the Just Jazz concert recordings I wrote of last week it was represented 4 times) and “Airmail Special” from the past. They are very good quality mono recordings. The double album goes on to give you the “Lionel Hampton and His Giants” LP and the “Apollo Hall Concert from 1954” LP.

You will find on this Avid reissue (AVID AMSC993) many of the players who were in the 1940’s “Just Jazz” line-ups, including Harry Edison, Art Tatum, Barney Kessel and Buddy Rich. It’s all great swinging music. That’s swing, not frantic! 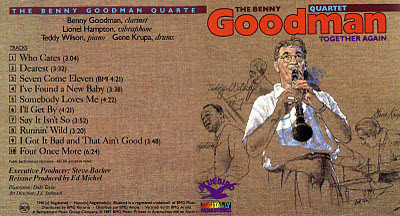 Following on from this new issue comes a newer recording but older issue CD!! “The Benny Goodman Quartet Together Again” was recorded in stereo in 1963. It has the same line up as the 1955 Lionel Hampton recording mentioned above, but this time WITH Benny Goodman. I have had this since the dawn of CD’s, and it is really excellent. Beautifully recorded in the days when they were trying very hard to “sell” Hi Fi, it has some of the classic BG Quartet tunes that were originally recorded in the 30’s including my favourite “Seven Come Eleven”, but also “Runnin’ Wild”, “I’ve Found A New Baby” and 7 other great tracks as well. If you need to be introduced to the Benny Goodman Quartet, go and find this CD. I have it on the Bluebird label (an RCA derivative) number ND86283.

One final bit of sadness this week. We have had the news of the death of Michael Garrick. He died last Friday.

There is so much of his work to remember him for, but those of us who heard him at Swanage this year, or at The Wooburn Festival very recently will be saddened that he couldn’t further our remembrance of the MJQ, something he was in the process of bringing to us.

He was 78 years old, still working to almost the last, and had just had a heart operation.

Posted by Geoff Cronin at 1:29 PM No comments:

Thursday night we have the genuine Clive Burton Quintet, complete with a recovered Clive Burton. He is healed enough from his back injury to play, but not, perhaps, to put his whole back into it!! Our regular saxophone section will also be with us, so look forward to some of the close harmony and special head arrangements that come out when the two of them get together.

Thinking of head arrangement usually leads one to think of pre organised jazz orchestration, well, at least to top and tail a well-known tune that is then played “off the cuff”. That was something lacking on one of the phenomena that was the original modern jazz jam session. Back in the late 40’s and early 50’s Gene Norman organised a number of jazz concerts in California under the banner “Just Jazz”. They were real, old fashioned Jam Sessions, with almost no pre arrangement of the musicians (apart from booking who was in town at the time), which becomes very apparent on some of the recordings when it came to ending a tune!

Over the years, some of these early concert recordings were released, most famously the Lionel Hampton led band playing “Stardust”, which came out on both sides of a 45. Recently, I have re mounted my Lynn turntable and have dug out a few LP’s to play, one of which is a 3 LP set of “Just Jazz” concerts all from 1947/8. 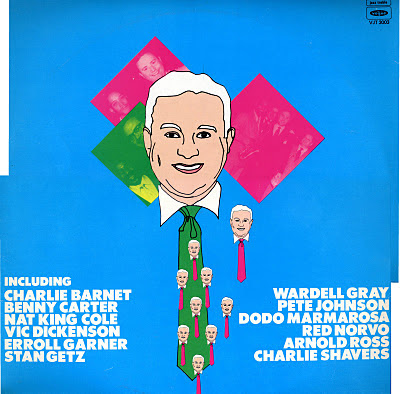 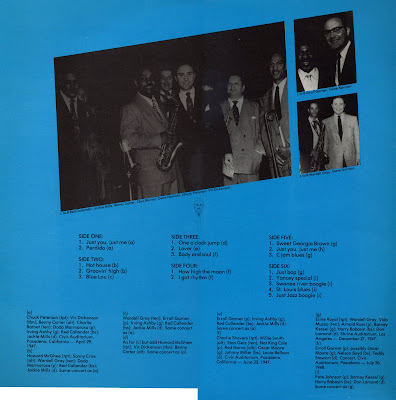 Part of the artwork for the 3 LP set

It is really interesting to hear some of the jazz greats performing without the limitations imposed by a regular band, or by a studio a recording, which usually only allowed 3 to 5 minutes per tune. LP’s themselves were only released in the USA in 1948 and did not come on to the British scene until 1949. The extended playing time of 25 minutes a side for a 12” LP (usually initially reserved for “Classical” music) did away with these limitations for tune length, and we became used to the extended solo on a recording we could buy and take home that was the norm for a live performance heard in concert.

Back in the 1980’s I bought “Gene Norman’s Just Jazz Concerts”, a 3 LP set. I paid a bargain £4.69! The cast list for Gene’s concerts was drool worthy. He could sell out the Pasadena Civic Auditorium (2978 seats) in 1947 at $2 each! Who did they hear? Vic Dickenson, Benny Carter, Charlie Barnet, Dodo Marmarosa, Howard McGhee, Sonny Criss, Wardell Gray, Errol Garner, and many more. And they were all on the same night, April 29th 1947. Wow.

OK, the sound in the hall probably wasn’t great, and it isn’t great on the recordings either, but it is a real treat to hear some of these guys playing on there day off for a little extra pin money. Real Jazz, dare I say, just like the sort we often hear at Hedsor.

I don’t think the LP’s (vogue VJT 3003) are still available new, but last week one was available on ebay for about £17.

I couldn’t see any reference on the web to the music being reissued at any time onto CD. What a Pity!

Why not catch a Thursday Night session at Hedsor for £5 instead?

Posted by Geoff Cronin at 2:37 AM No comments: