It’s a rainy Wednesday, and a suitable time for a bit of blogging!
Life seems to have been driving along very quickly recently. There was the wonderful Cookham Festival Jazz Concert with Vasilis and his band, quickly followed by The Hedsor Social Club Cancer Research fundraising concert, reported on in the last blog. The sum raised, by the way, is now inches away from £550. Not as good as last year, but considering the financial situation generated by the nations great banking skills, very creditable.

It would be nice to think that all we had to do was listen to the great jazz music that is around, but, as we all know, life is more complicated than that. And sometimes a lot more mundane. Thursdays always seem to come around very quickly, but to my mind the evening is always a high spot in my week. I often arrived tired, with too much on my mind. But the genuine friendliness (well, I think it’s genuine!), and warmth that’s usually around lifts me as much as the music always does. And if you are one of the people who read this, but have yet to EXPERIENCE The Hedsor Phenomena for yourself, then go on, break your duck. (Well, it IS raining).

OK, away from this philosophy, and towards the music.

This Thursday I really do believe we have the complete and original Clive Burton Quintet. No named stars, but all stars! And they do sometimes play requests. Do feel free to request that Don doesn’t sing again!

Last Friday saw the High Wycombe Festival’s jazz evening. This year it was the Alan Barnes Octet, playing the music of Duke Ellington and Billy Strayhorn. Very, very good music, arranged by Tony Faulkner. A real array of British Jazz Talent. Andy Panayi seemed to be leading the orchestra, with Alan doing all the talking! One member of the band that I was delighted to hear was one of my all time favourites, Tony Coe. He is beginning to look a little fragile, (he tells me he has a knee problem, but he did mention getting is prostate shrunk as well!), but his playing was wonderful. Full of invention, a really recognisable sound all of his own too.

I think it made us both feel old when we discussed the year I first heard him live, and the fact that I was doing National Service when he left the Humph Band!! Hey Ho.

Some of the same music, and most of the same musicians are available to you on CD. Woodville WVCD122 “Harlem Airshaft” is very well recorded and great value. I bought it on the night for £10!

On the night but not the CD was a young trombone player that I didn’t know, and didn’t catch the name of. But Clive had better watch out!

Don’t forget, its down to YOU to keep live jazz alive. You could always try Hedsor tomorrow! And it will only cost you £5, not the £500 that tonight’s football match will cost some people!
Posted by Geoff Cronin at 2:27 AM No comments: 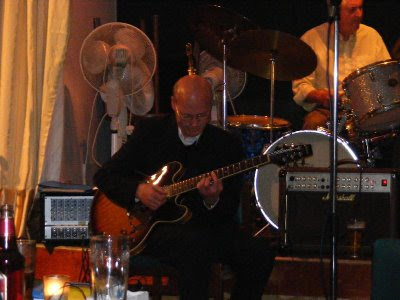 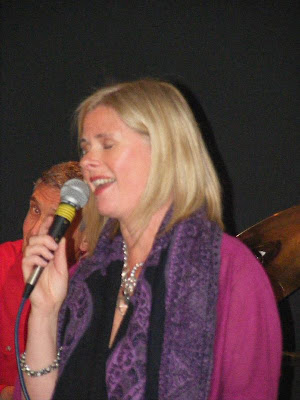 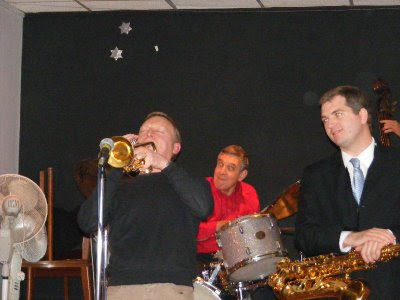 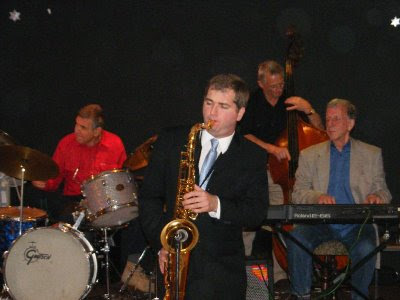 First of all, a BIG THANK YOU to all who helped make last night’s concert as enjoyable as it was. Those who performed are obviously a big part of that, and one, Clive Burton, just doesn’t get the thanks from all of us punters that he deserves. He is the man, who week after week makes sure that there is a superb bunch of musicians coming to Hedsor (for very little money, I am the first to recognise that) and giving us world class, live, modern jazz. So well done Clive.

Secondly I would like to highlight the ladies who provided all that lovely food. The plates omission was that crack between organisers I’m afraid, but the grub itself was excellent. Thank you too to all the willing volunteers, who are always there to help. They put out the chairs, and clear up afterwards as well. But I would like to mention in my dispatch Mr and Mrs Weinblatt, do take a medal. Their help has always been offered first, and every time.

I don’t want to go through the list of musicians who played last night. I did that on the program notes. They all did an admirable job. The quality is so high, that those of us who go to The Hedsor Social Club on a regular Thursday night basis tend to take it all for granted. We see them on their good nights and sometimes on their not so good nights as well. We all have those (well I do). The guys and girl who performed for us last night have all been to Hedsor before on a “normal” Thursday night. They are great players, so next time you see them, tell them how much you appreciate what they do. If we didn’t love such a minority music, they would all be household names.

Simon Spillett is of course becoming a household name. I just want to quote one email received after the event last night (yes I do mean it was sent last night!) “Simon Spillett is SO SO good on those ballads. I bought the cd...” Jazz Rising Star and CD of the year. At Hedsor!! We don’t know how lucky we are to have access to such a quality bunch of players.

So, did we achieve our objectives?

As I wrote to one well-wisher yesterday before the event “I ponder my objectives for the concert. Yes, raising money would be good, but to give joy to those paying to listen, probably more important.”

Well, I think we achieved that.

The Money for Cancer Research , this year will be just over £510, so we did that as well. Well done everyone.

Next week, at Hedsor you can thank another supporter. Jan Burton celebrates a Zero end birthday with us next Thursday, It will be the “Regular” band, with, I think, only Martin missing (welcome back Mike Jeffries! He has hardly been away!!). Jan has promised more food!!

We are really becoming a big family, isn’t that nice?

Posted by Geoff Cronin at 2:57 AM No comments:

Its time for a blog!

Last night was the Woodley Theatre Jazz night, organised by our regular Hedsor drummer Martin Hart. A nice little band, with Ken McCarthy on keyboard (with a very nice audio setup, it sounded a treat), Nick Pugh on bass, and Vasilis Xenopoulos on Alto and Tenor Saxophones. As a pickup band they played mostly standards (well know tunes really) and it all went extremely well. I don’t know if it is a sign of the economic times, but there were still some empty seats, which is unusual for this small intimate performance area. I enjoy going there, and will try and blogg about the next one. They run 6 a year.

Driving home along the A4 was a bit like a time warp. The A4 at 10.30 pm was almost deserted. It felt very much like I was driving back in the early 1960’s, hardly a car in sight, wonderful!

Now to the bits we haven’t done yet. Next Tuesday May 12th, at The Marlow Jazz Club, British Legion Hall, Marlow, Vasilis is playing again with guitarist Nigel Price. Those of you who came to the sell out Pinder Hall Concert (part of the Cookham Festival) will remember Nigel and will want to hear the combination again.

Then, the event I haven’t done enough about. The annual (now) concert to raise funds for Cancer Research UK takes place at The Hedsor Social Club on THURSDAY May 14th from 8pm, yes that’s right 8pm.
The entry will be £10, there will be an additional cost Raffle, but some food will be there for you to graze during the evening. Please ensure you buy your drinks at the bar, though you can bring your own coffee!

The line-up for this event should attract you, even if you are hardened to charity causes.

Clive Burton, and his trombone, will be our host, Zane Cronje will be our keyboard player, Ken Rankine will be on bass, and Martin Hart (with less jet lag than last night) will be our drummer.

They will be joined by singer Liz Cooper, guitarist John Coverdale, trumpeter Stuart Henderson, and BBC Rising Star Simon Spillett on tenor saxophone. Simon has also just been awarded best album of the year by Jazz Journal for his CD “Sienna Red”

It will all take place in the big room at Hedsor, and all we need is a big audience, which is where YOU come in. Come along, bring your friends, and tell others about it too. Let’s make it a sell-out, and raise lots of money for cancer research whilst having fun ourselves.

Many will know why we do this concert every year for Cancer Research UK. Originally the band Clive Burton now leads was founded by drummer Keith Vitty. Keith died of bowel cancer in 2002, just 3 months before my son Stuart died of lymphatic cancer. Many of Hedsor’s fans and supporters have died of cancer in the intervening years, Ernie Evans, our original sponsor, who founded Jazz Heaven, and Jazz Angels for one. But a number of others have been affected by this condition too. So please turn out. It should be great fun (if I don’t weaken!).

A long time ago, in a magazine called The Gramophone (still being published) they used to have a section called “Nights at The Round Table”. They also had a section that reviewed Jazz. I don’t think they do this now, because they seem to have concentrated on Classical Music these days. But I thought of this, because when they did do both of the above, I had an LP of pianist Ralph Sutton. This week, a CD by said Sutton turned up. Soliloquy Music SOL 002 has a most unusual (but beautifully recorded) provenance. Called “Bedroom Session” you may think “risqué music”. However, this recording saw him playing a Yamaha Disklavier recording piano in the London bedroom of a fan. Sutton is a stride piano player, and he really does shine on tunes like “Old Fashioned Love”, “Alligator Crawl”, “A Hundred Years from Today” and a dozen or so more of the same ilk.

Ralph Sutton died in December 2001, and this set of recordings (effectively recorded on to floppy disks) came to have a greater value. So the floppy disks found there way to a Yamaha grand Disklavier and were acoustically recorded. It is so much more realistic than a piano roll, and the sound quality is excellent. I really recommend it to any stride fans out there.

Another recording of note to rotate in my front room this week is a recent recording by Scottish singer Carol Kidd. I have never forgotten hearing her first recording played by Humph on his Monday Night program. He played one of his “guess where she comes from” games, and I bet most would have said America. She still has the magic, and the determination for perfection in her recordings that marked her out for Humph’s special treatment. “Dreamsville” is a LINN SACD, i.e. a technically superb recording, released last year, containing some familiar songs. “How Deep is the Ocean”, “Stars Fell on Alabama” and “It’s Alright with Me” being just ¼ of them. The Number is AKD 325, it's called "Dreamsville" and, yes, it does play on your ordinary CD player.

I still don’t know anyone with an SACD player, or anyone with a Disklavier for that matter, but it doesn’t stop this wonderful music getting through.

What ever else you do though, keep live music alive.

The best fidelity to jazz music is your presence!

Posted by Geoff Cronin at 2:47 AM No comments: