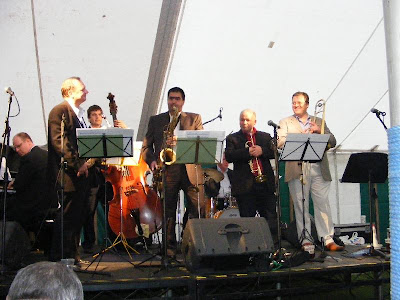 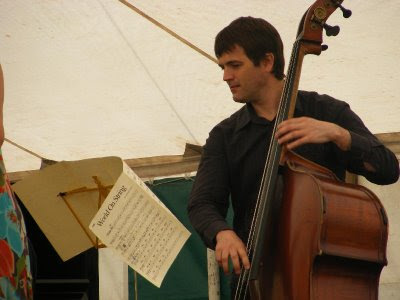 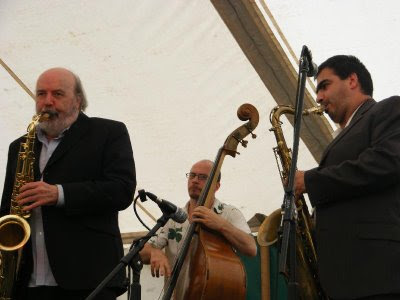 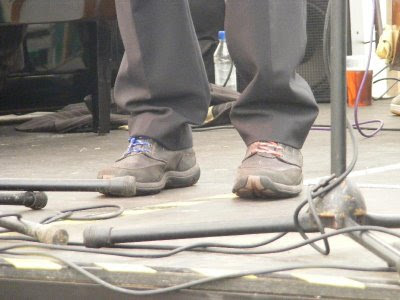 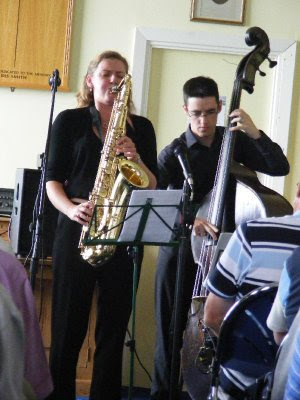 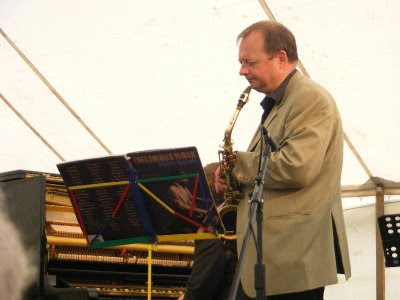 Some Thoughts on The 2008 Swanage Jazz Festival

The Swanage Jazz festival is always one of my years highlights, and over about 17 years, I haven't missed one, even if I have been carted away from one with an operable heart condition. I was even back in time for the following years events.

Some Festivals are more memorable than others, some great, and some just good. But hey, good is great isn't it? A few more good week ends would keep the world happy, so no criticism is ever intended.

One persons view of Swanage is obviously very subjective. You could go to the same festival, and always see something that I didn't. And you can say that for at least three people, which is why I always say to people that they must go and "stroller" round to find out who/what they like.

So what did I see.

Marquee 2 Alan Barnes and the Woodville Allstars.
And they are all stars! I have an awful memory for names, but the stars included Enrico Tomasso on trumpet, Andy Wood (? might have been a dep) trombone, Andy Panaya reeds, Robin Aspland piano Andy Cleydert bass and Bobby Worth on drums. A stunning evening full of rich harmonies as Alans band played tribute to Johnny Hodges. He kept apologising for playing these wonderful tunes. When I saw him next day I told him he didn't need to do that,and that when I had recovered from Ken Colyer in the 1950's, my next love was Johnny Hodges!

It could have been the 6 session pints he had consumed that made him apologetic!

The Lee Gibson Quartet were my first port of call. Lee is an attractive singer, well able to handle the jazz standards she sang. She was more than ably supported by Robin Aspland on piano (in my view a greatly underrated player, who was excellent through the whole weekend), Andy Cleyndert on bass, and Bobby Worth on drums.

As I wanted to catch a young lady saxophonist in Marque 1 usually reserved for traditional jazz, I didn't stay for all of Lee's second set, but went to Marque 1 to see Amy Roberts Jazztet. I had seen her before, and thought for a 19 year old she was a bit special. Unfortunately although she was, I didn't enjoy 2 of her "tet", so moved on, which is one of the joys and abilities of a stroller ticket.

Back in Marque 2 due to an immigration intervention, the billed Aaron Weinstein was unable to attend, and in his place we were all lucky enough to have tenor man Don Weller, who was supported by Craig Milverton on piano, Simon Thorpe bass and Bobby Worth drums. He was also joined by Andy Panayi on tenor, and that session produced some wonderful, unrehearsed, straight ahead modern jazz. A wonderful bonus session. I wonder how many people noticed Dons boot laces, carefully coloured for port and starboard shoes!

After a brief pause for some sustenance, I went to the Molem Committee Room to see a young Scottish lady saxophonist, Jo Fooks. I had seen her once before in the late Humph's band, and she is a very accomplished player and writer of tunes. The room was very full, and isn't the nicest one for atmosphere, but I'm sure all who could get to see and hear her were really impressed. In her quartet she has the advantage of Dave Cliff on guitar, so it was a good time to catch him too, as he is another of my favourites.

The evening session (back in Marque 2) was Arnie Somogyi Scenes in the City. Now because I had taken a break for dinner, I only caught the second set by this group, and I thoroughly enjoyed it. I know some who were at the first set left as it wasn't to their taste, which just goes to show that one size doesn't fit all. As well as Arnie on bass, the set had Alan Barnes and Tony Kofi on saxes, Alister White on trombone, Mark Edwards piano and Enzo Zirilli on drums. Mingus type tunes, wonderful writing, and harmonies to die for. I thought it showed how good jazz in Britain can be.

I started the days jazz listening to the Bournemouth Youth Orchestra. All youngsters being given the benefit of playing as a band before the public. One or two were really accomplished players, but for me it was the young Sinatra singer who was their star. The young man has a wonderful voice, and sense of style, and I do hope he carries on with the music, because he was GOOD.

Next up was the same band as Arnie's from the night before, but without the scores, and without the trombonist. Well done all, I particularly enjoyed Tony Kofi. Everyone had good extended solos, and there was an overall supportive rapport between all. It was also very encouraging that for at least one number, Alan Barnes needed the Theloneous Monk Fake book!

Following them was another tightly organised band, the Matt Wates Sextet. Not a lot of room (just about enough) for individual solo's, but carefully crafted arrangements and very tight playing. They have been around for many years now, and it shows. The regular band (Martin Shaw trumpet, Steve Kadestad tenor sax, Leon Greening piano, Julian Bury bass), were joined by Jamie Cullums drummer Sebastian de Krone (?spelling?). Some of the original material that Matt has produced is fast becoming standard in the repertoire of other modern jazz ensembles.

My final real listen this year was in the Marque 3. Initially I had gone for the walk to see on of my long time favourite saxophonist Tony Coe. He was to be part of the band backing singer Julie Dunn. However, due to ill health, he had opted out. I stayed on to be enthralled by the singing of Julie, and the piano playing of John Horler. I stayed for the entire performance, and was sad by the sessions end. It was a masterful example of singer entertainment. Right voice, right songs, and right links to the audience. And isn't John Horler good?

An arranged dinner with some of the many friends I now have at the Swanage Jazz Festival followed, at the end of which we walked to Marque 2 for our last set of the show. However, I just couldn't take to the singer, and left to take in a quiet Scotch whilst watching the sun go down on another excellent Swanage Jazz Festival.

Just a suggestion for the organisers. How about using Ray Gellato and His Giants for a finale next year, and how about presenting Vasilis Xenopoulos to Swanage Jazz's discerning audience. After yesterdays Ealing Jazz Festival Performance, he should be exposed to Swanage!!

One last comment. Thank you to all who organise this annual event. I have been coming since almost its inception, I have been removed from it for heart surgery, have returned to it days after my son died of cancer and before his funeral, and look forward to it every year in the knowledge that I will enjoy most of it, and meet many, many friends. So thank you Swanage Jazz for all your efforts.

Posted by Geoff Cronin at 1:55 AM No comments: