THIS WEEK AT HEDSOR JAZZ

With our regular piano player Nigel Fox still on his holidays it will be a delight to have back with us (as last week!) Ken McCarthy as his replacement. We are fortunate indeed to have 2 such fine piano players who are keen to come and play for us at Hedsor Jazz.

I don’t always get a lot of advance notice for some of our star guests, but I do have it for one, who is coming on a very significant day in May.

And one May has had him arrange music and accompaniment for her as well!

In my electoral area one of the candidates is Teresa May MP, who came and gave out the raffle prizes at one of our Cancer Research fundraising concerts a few years ago!!

So, that’s 2 May’s for our general election night!!

The third is May, who has also been with us in the past is Tina May, and it is she whom our guest for election night wrote scores for. 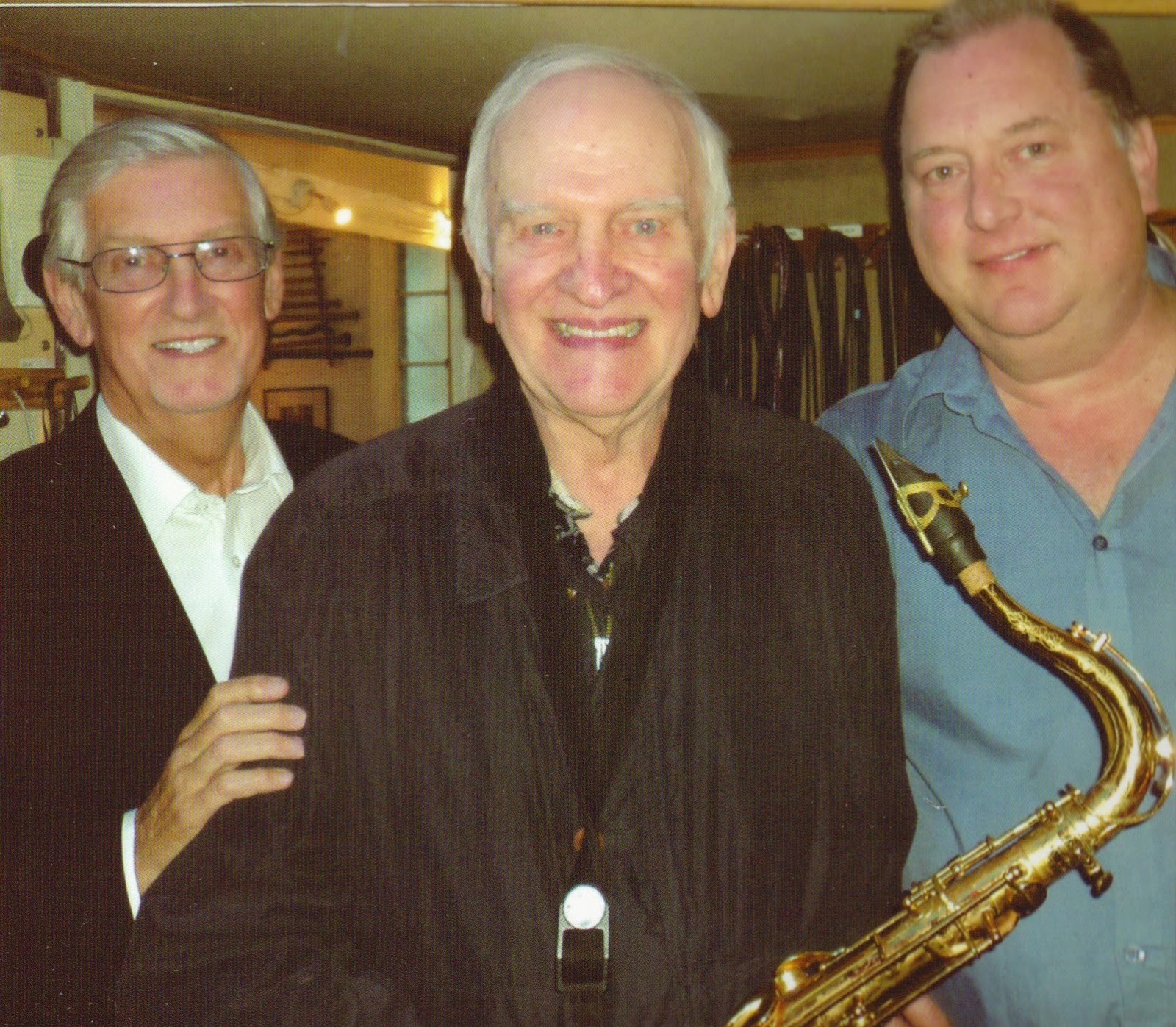 The CD for which Frank wrote the arrangements is Tina May’s “My Kinda Love” (HEP CD2101) and on the cover of said CD is another link to Hedsor Social Club!! The CD features some of the music of Duncan Lamont!! So if ever supporters should go and buy a CD it is this one. All three musicians have played Hedsor Jazz at some time in the not too distant past! AND it is well worth buying too. One of the songs featured on this album is Lamont’s “Manhattan in the Rain”! I can strongly recommend the album.

So, when you have voted for the candidate of your choice, come and vote for the music of all our choices, Modern Jazz, with Frank Griffith and The Clive Burton Quintet. Put it in your diary NOW.

Another CD recently added to my collection has people on it who have (sadly) never been to the Hedsor Social Club!! “Humphrey Lyttelton in Canada” on the Sackville label (3033) has some 1980’s Humph in fine form, with saxophonist Jim Galloway, guitarist Ed Bickert, Neil Swainson on bass and Terry Clarke on drums. Most of the tunes will be familour to Humph fans, all having been featured at some time on earlier recordings by the H.L Band! It’s a terrific addition to the catalogue!!

It’s wonderful to be able to have vibrant jazz to play at home, but it is better to listen to vibrant LIVE jazz! So do come and join us at the Hedsor Social Club. You know it makes sense!!
Posted by Geoff Cronin at 9:33 AM No comments:

But Thursday Night is ALWAYS reserved for Jazz at The Hedsor Social Club, (otherwise known as Hedsor Jazz!!)

This week it is the regular Clive Burton Quintet, yes, all our regulars are in the same place tomorrow night!!

It is the usual £6 to get in, and the usual voluntary excess to get out!!

Then of course you have our world renowned raffle!! He do we do it? And all included in the price too!!

So why not come and enjoy Maundy Thursday at Hedsor.

Looking further ahead don't forget to reserve September 26th as a jazz day!! That's the day Hedsor Jazz goes to school!! Much more later, but it WILL be a very special day, with all of your Hedsor favorites coming to a school near me!!


Until then, let Hedsor Thursdays keep you sane! 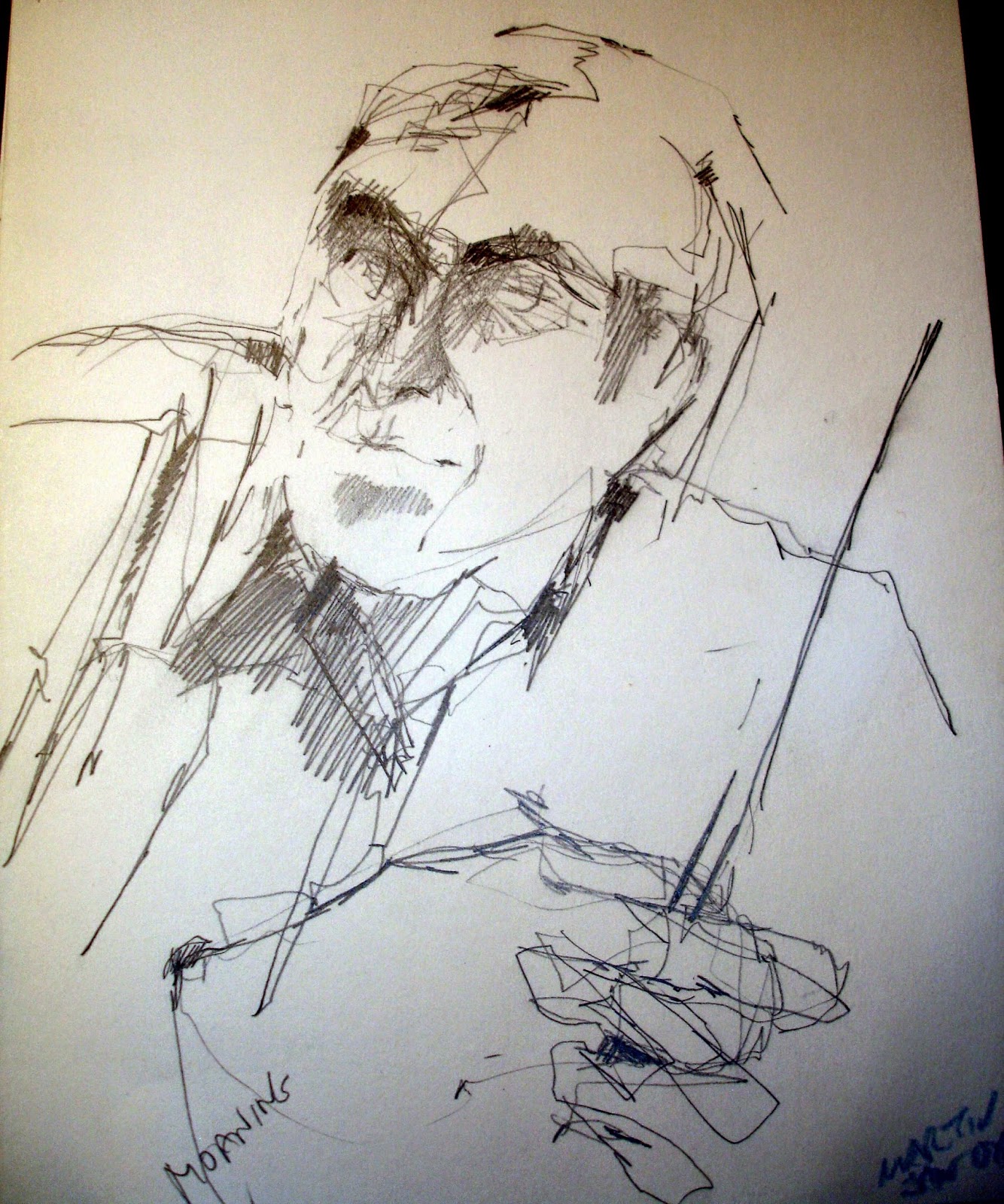 An artists impression of our regular drummer, who's new CD is still available!!
Posted by Geoff Cronin at 10:20 AM No comments:

Time flies and it has past the time for a few words about Hedsor and Jazz.

So, OK this is LATE!

The Good News is that you haven’t missed anything. The Clive Burton Quintet WILL be appearing at The Hedsor Social Club, as usual, tomorrow evening. The music starts at 8.30 pm, and we will still let you in for just £6. Those of you who have been before will realize that there is a small (voluntary) sum to be contributed before we let you out!!

I haven’t written anything about Jazz on CD for a longish time, so lets catch up on a wonderful box set released in 2001!!

OK I know I’m quick of the mark, but sometimes nostalgia drags you back to things of yore!

The yore is of times further ago than 2001 too. Proper Box 24 is a 4 CD set of Louis Armstrong recordings from the 1940’s. It is a gem. The booklet on the early life of Louis is almost worth the cost of the box itself, it is so informative and well done with lots of photos, but the deep joy must be reserved for the music itself. It is all presented in date order, ending up with the 2 concerts that went on to launch The Louis Armstrong’s All-stars, the only medium he used for touring and his music ever after. The Louis Armstrong All-Stars became the USA’s musical ambassadors to the world. 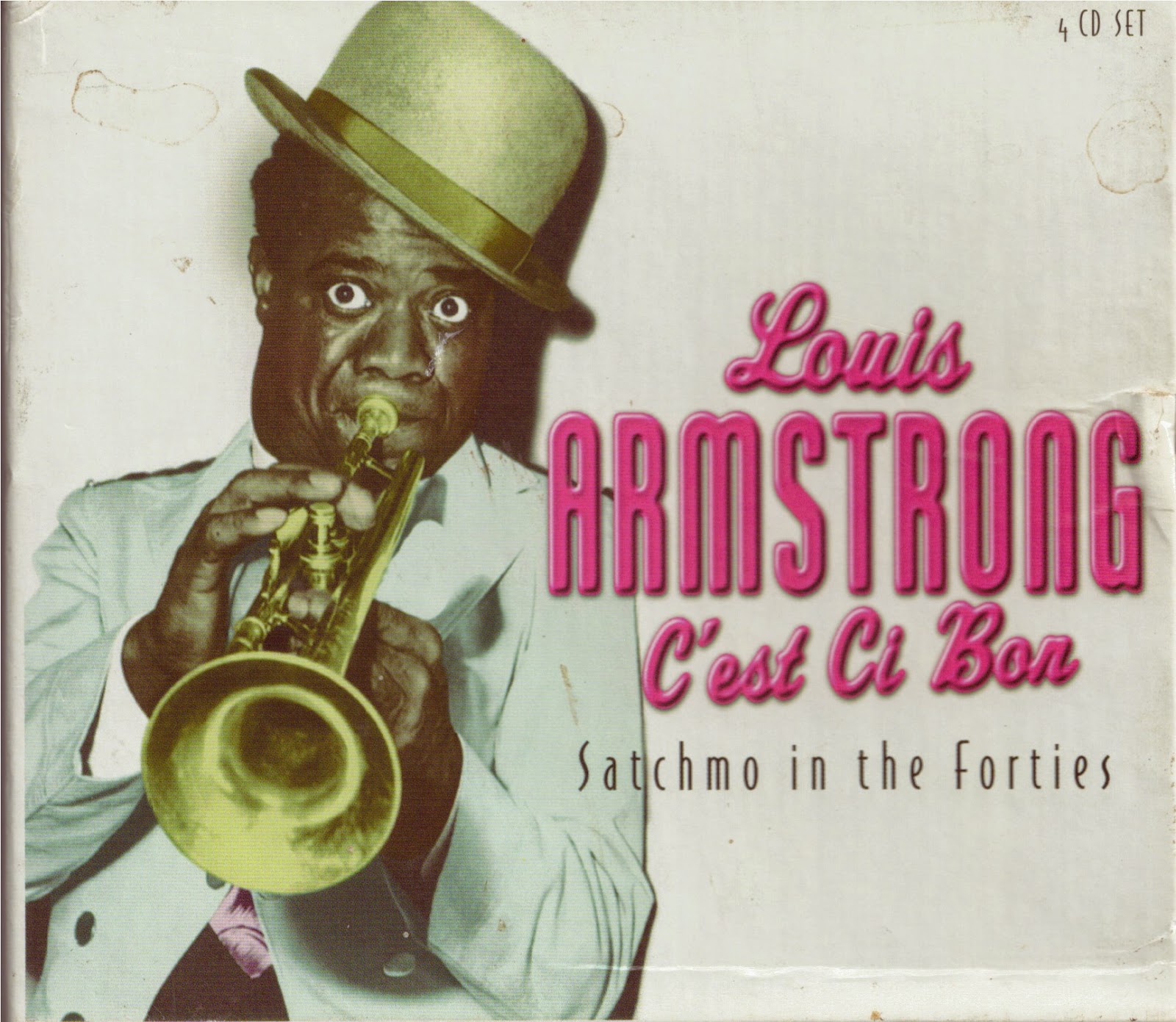 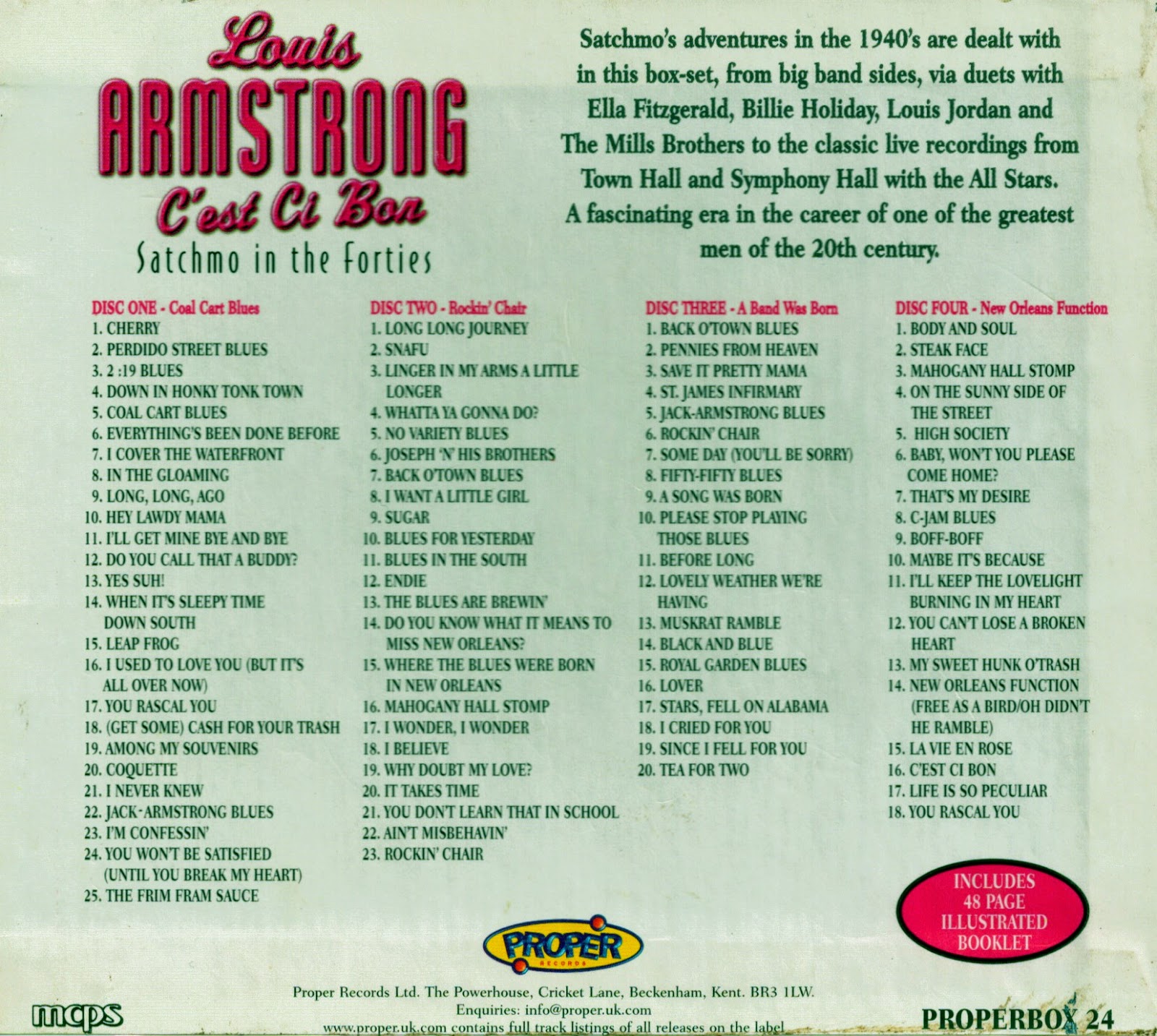 One or two things to highlight. Most of the material is Louis with an orchestra, generally showing his ability as a soloist, the orchestra largely not having in it anyone who could outshine Louis!

In 1946 he recorded some small group tunes again, some even under the heading of Louis Armstrong and his Hot Seven! It is very interesting to hear the “prequel” to the All-Stars this early. On some tracks the trombone is played by Vic Dickenson, whilst on others it is actually Kid Ory!!

He remained the leader of a big band, and it is interesting to note that buried in some 1946 recordings is tenor sax player Lucky Thomson, a wonderful star of early bop, who sadly did not live up to his nickname.

Come 1947 and the famous New York Town Hall concert is represented (I think all that is available is here). Louis was still touring with his orchestra at the time, and the ensemble (Jack Teagarden, Peanuts Hucko, Dick Cary, Bob Haggart and Sid Catlet) were brought together by Bobby Hackett and rehearsed by him for the big man to be able to just fly in and play the night!! He can clearly be heard, but sadly, the sleeve notes give him no credit!!

The recordings are generally very listenable to and it is a purchase well worth making. It is still listed on Amazon at £13.73!!

Whatever else you do (think of the scope!!) don't let Live Jazz die. It, and the musicians who play it, need an audience, that's YOU!!
Posted by Geoff Cronin at 10:31 AM No comments:

“The Away Road”
The new CD from Martin Hart 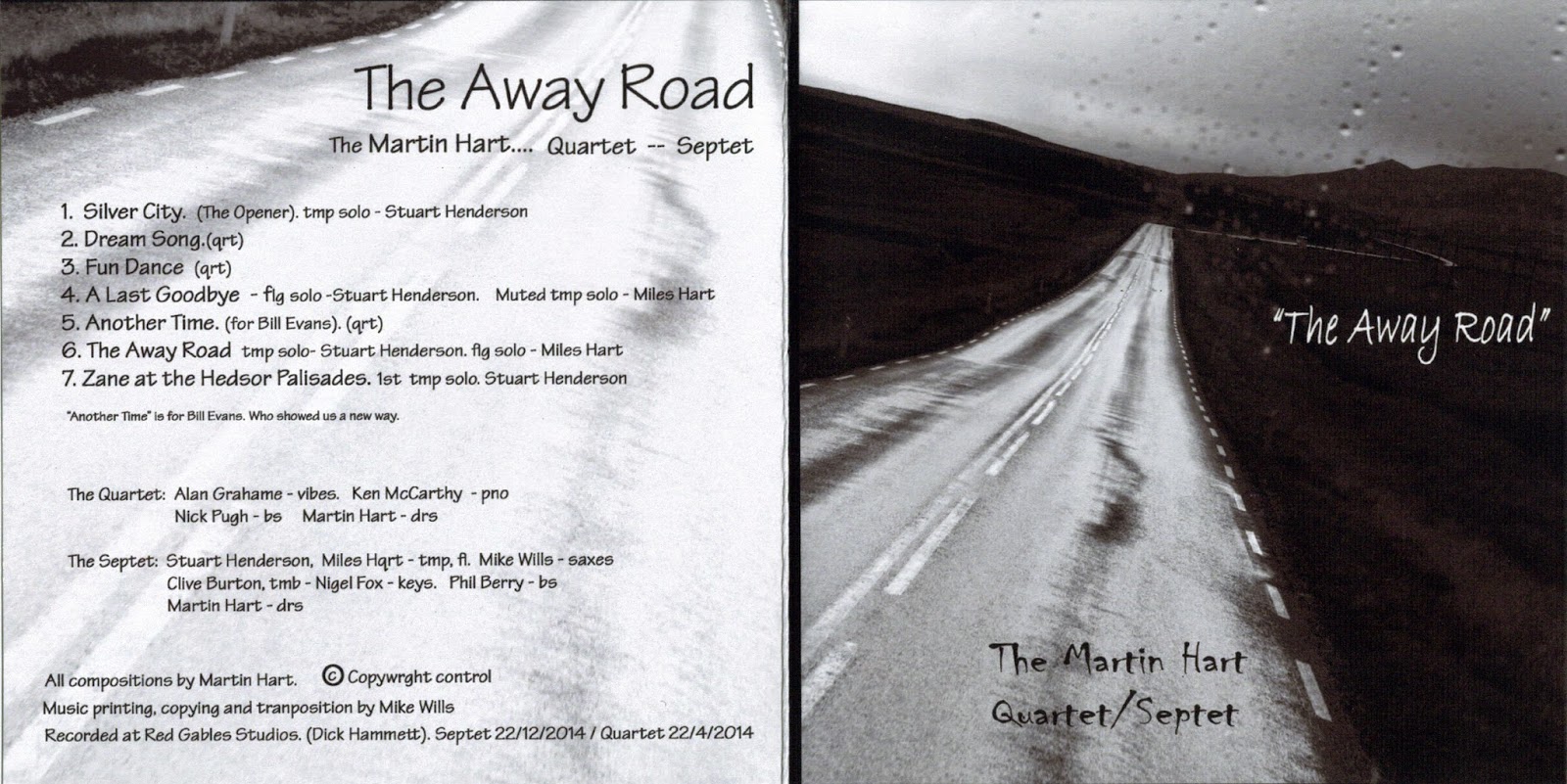 I have now had time to listen to Martins new CD, and “now’s the time” to write a bit about it.

Firstly it contains 7 tracks, and all the tunes have been written by Martin.

Secondly the music is divided into 2 different ensembles, a Septet, and a Quartet.

Anyone who has been to Hedsor on any of our jazz nights will have heard most of the musicians before as they are all regular favourites of ours at Hedsor Jazz. The cast list is as follows:-

Musically my lasting impression of this collaboration is of rich harmonies. Whether it be the Septet or the Quartet the music is conveyed with a really rich sound. I was particularly impressed by the sound of the Quartet. With fewer people it is harder to convey that rich musical sensation, but here they do so really well. The Septet has an advantage in having more people to make up that richness and sounds, surprisingly, much more lie a big band.

It was also interesting to note that there is an 8-month gap between recording the 2 different groups, the Quartet being recorded earlier in 2014 than the Septet tracks.

For those of you who wont know the capabilities of “our” regular musicians be assured that in their individual ways they are all superb. Usually we are aware that Nigel Fox is a Bill Evans devotee, but here the tune that Martin has dedicated to Bill Evans has Ken McCarthy on piano! Stuart Henderson has long been a favourite trumpeter at Hedsor, and on this CD he again shines through. However, Martin has a homegrown trumpet player (who has appeared once or twice at Hedsor) in the shape and sound of his son Miles. Listen out for his muted solo on “The Last Goodbye”

All the musician, so well know to us at Hedsor, are well represented with solo space on these recordings. The recording itself is of good sound quality. I know some of you who read this will have some of the recordings I’ve made during live Hedsor Gigs but this is definitely a recording of real studio quality. So, even though you will not know the tunes before purchase, you will be able to have a recording of the kind of music we have offered to us each week at Hedsor in fine sound quality for the first time in a some of years (The Norden Farm Recording of the quartet under another name – Century Jazz, were made in 2003!).

One last comment. The final tune is entitled “Zane at The Hedsor Palisades”, which has puzzled me no end. I think it must signify a retreat, as according to Wikipedia “A palisade—sometimes called a stakewall or a paling—is typically a fence or wall made from wooden stakes or tree trunks and used as a defensive structure or enclosure”. So a retreat from a defensive wall. Why? Because, just as the full ensemble are getting going (with Mike Wills on clarinet), the band are faded out, and quickly too! I think that is a shame!

Ah well, you can’t have everything.

But you can have this CD, no doubt signed by some of the guys on it, especially if you come to it’s launch at the Hedsor Social club on Thursday this week, March 5th.

It will enable you never to miss the sound of Hedsor jazz, even when you are on “The Away Road”. 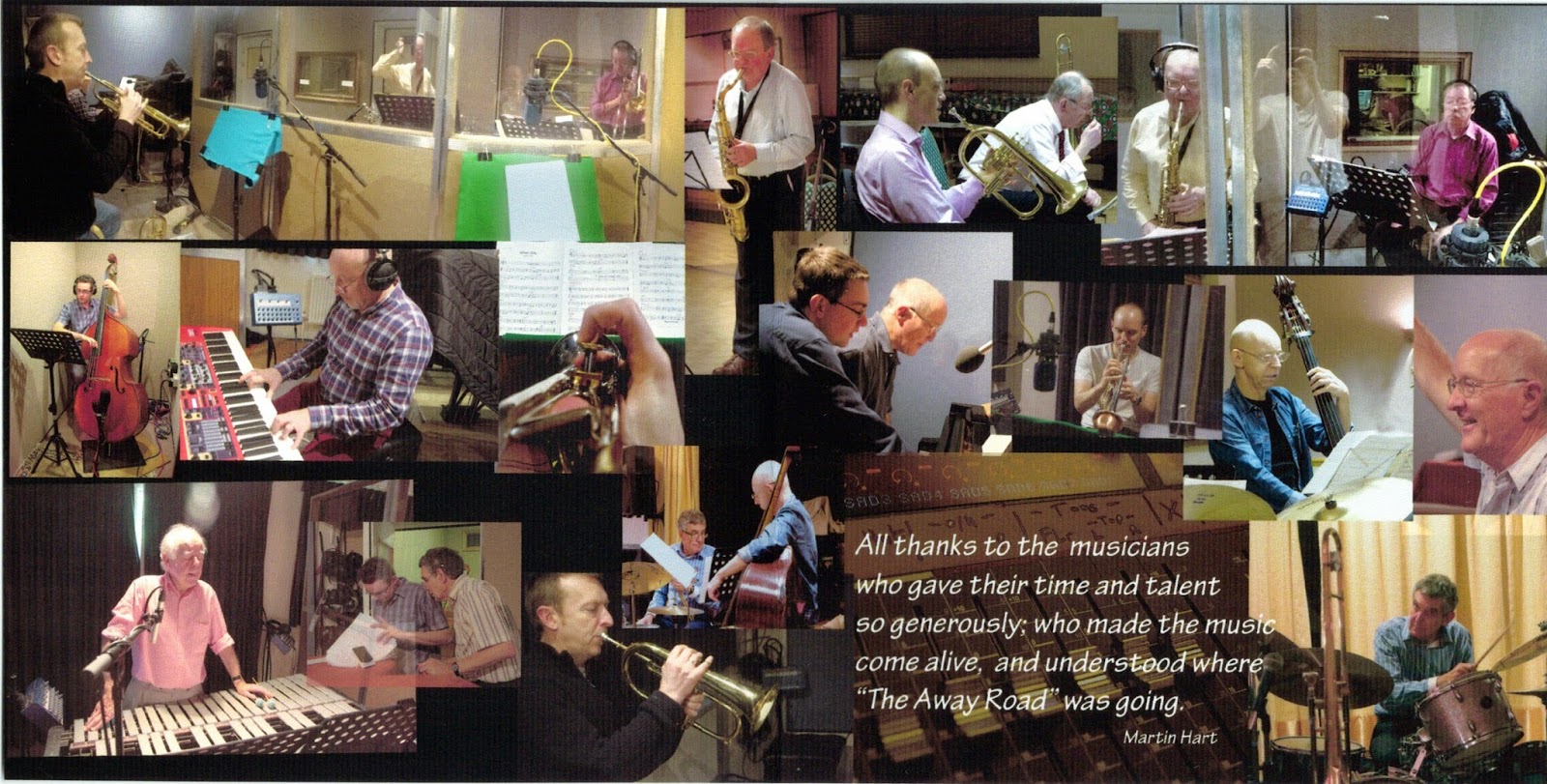