A little nagging about some of the good live jazz that's on this week.

Wednesday at "The Harrow" up Hughenden Valley, Lynn Garner, Ken McCarthy and Brad Lang team up again to give you an evening of song, with a little humour. The Little Jazz Bird will sing from 8.30pm, its a free event, and hot food is available.

Thursday, the guest at The Hedsor Social Club, alongside The Clive Burton Quartet, will be saxophonist Brian Thompson. Again it's an 8.30 start, its £3 to get in, and further funding for the band is provided by the famous raffle.

Please add in to your diary Friday 28th March, when we will be again running a concert to raise money for Cancer Research UK. This year it will be at The Hedsor Social Club, which is fast becoming an important local jazz venue. Tickets will be available soon at £10 a head. It will be run on similar lines to before, in Cafe style, where you can bring your own feast, but you must get the drinks from the bar.

One last word for now at least, and that is a retrospective look at The fabulous Shirtlifters evening of Winter Ineluctability (last Saturday).

The place was packed, the fun was HIGH, and they had as guest Rolf Harris!! Yes, he did play his accordion with them on at least 2 numbers, and told a couple of quality jokes to boot! And it wasn't John Brooks in drag!!

Mike Wills was another playing guest with them for the evening, and he played his very small 1910 bent soprano sax with real style.

Well done Shirtlifters. It's amazing that they can go on doing it year in, year out, giving away many thousands of pounds to charity over those years.

Geoff C
Posted by Geoff Cronin at 12:29 PM No comments:

Just to remind and inform you that the cast for the jazz guitar night on Monday (21st Jan) at Hedsor is James Fenn, guitar, Lisa Amato, bass, Nick Marangoni, drums, and Peter Billington on keyboard.

Peter is the keyboard player for Pendulum (It used to be called The Berkshire Youth Jazz Orchestra), and usually plays keyboard for the Jazz at Norden Farm sessions.

Do come along (for an 8.30pm start), bring your friends, pay the measly sum of £5 and sit back for a night of great entertainment!

Geoff C
Posted by Geoff Cronin at 12:13 PM No comments:

Another Repetitious Reminder Or NAG to those who know!
At the Hedsor Social Club this week, we are delighted to welcome back, not exactly a guest, more a member of the band, Mr Mike Wills. He will be joining with Clive and the rest of the fellows to bring you our usual entertaining, mellifluous, swinging LIVE JAZZ.
Entry will be the usual £3, raffle money will also be extracted. Start time 8.30pm
Sunday, The Fifield Inn's guest will be that wonderful guitarist Max Britain. Entry is free, hot food is available, and there WILL be a raffle to fund the band.

Two advance notices, unfortunaly for the same day. Its done to test your allegiance of course, BUT on Saturday 26th Jan, at Cookhams Pinder Hall you can take part in a Winter Ineluctability, organised and featuring the fabulous Shirtlifters. Contact Charles Benson (01628 472163) for more details, entry by ticket, so buy ticket @ £8.

BUT also on the same night, our regular drummer Martin Hart is running a concert in The Woodley Theatre featuring music from the 1971 New York Town Hall concert given by the MJQ and the Dave Brubeck Quartet.

Paul Desmond becomes Peter Cook, Alan Graham will be on vibes, Nigh Pugh will be on bass and Ken McCarthy will be on the piano. Martin of course will be on drums, and giving the chat!

Another advance notice, but this time not so far away, I will be running another in the series of guitar jazz recitals at Hedsor on MONDAY January 21st, with that very talented young guitarist James Fenn and his team of chosen musos. Do come, you know he always brings great players with him. Entry will be £5, we don't do a raffle, so THAT IS REALLY ALL YOU NEED TO PAY TO HAVE A FIRST RATE JAZZ NIGHT OUT!!

A notice for February, Centre Jazz will be running their first jazz night since the death of Bernard Spinks, it would be nice now to support that venture even more than ever now, and the music on that night will be led by veteran drummer Bobby Orr. That's February 5th.

Yes, there is a lot of jazz roundabout to support, and we are very lucky in it being so. It aint like it everywhere, so why not make the most of it whilst it's still there.

Geoff C
Posted by Geoff Cronin at 1:42 AM No comments: 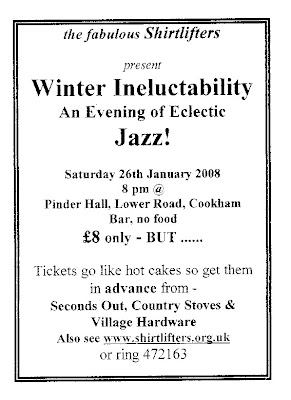 What an Inexcusable Ineluctable mistake!!

I missed the poster art from the blog!! Here it is in glorious black and white.

Geoff C
Posted by Geoff Cronin at 4:17 AM No comments: 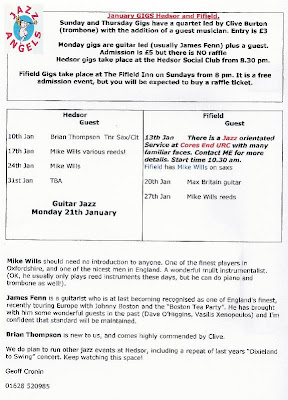 First, a sad addition to my emailings.
I learnt just after New Year that Bernard Spink, (who did the announcements and took your money at the Bourne End Community Centre Jazz nights) died on Friday December 28th. He will be sorely missed in and around Bourne End, and I would certainly wish to pass on my condolences to his Family. He was a lovely man, and a great Friend to the local jazz community.
He was a great Al Nichols fan, and I'm sure he wouldnt mind me following the above, with the below!
Some January Gig dates are on the list above (to see an enlarged view or to print the artwork, right click your mouse).
BUT you can also add in some from Al Nichols:-

Hope to see you at some point.
Al"

You will note that THIS THURSDAY we DON'T HAVE Peter Cook, he was offered a much better paid gig in London.

On January 26th you can have an evening of Winter Ineluctability with the fabulous Shirtlifters, see also above!

AND you will see mention in the gig list of a one off event at Cores End United Reformed Church (which many of you go past to get to Hedsor). I have been invited to run a Jazz Service there THIS SUNDAY. We will have a wonderful lady singer called Melrose, together with Zane Cronje on keyboard, Keith Wilkins on Clarinet, Ken Rankine on bass and Mike Jeffries on drums. Do feel free to come along, it starts at 10.30 am, should last about 1 hour, and will include some Bernstein and some Ellington!

I hope to see you all somewhere soon, do help jazz to thrive in 2008.

Jazz that has thrived in the past is always available on CD, and I have 2 to recommend today.

One from 1953 features Lionel Hampton and His Big Band recorded live for Swiss radio.

I think most of us feel we know Lionel from his days with Benny Goodman, but he did form his own big band soon after the famous Carnegie Hall Concert, and went out on his own. He continued to performed well, even in his later years, and this recording is not only good musically, but in good clear technical terms as well.

The band he gathered around him contain some interesting names as well. In the trumpet section are Art Farmer, Clifford Brown, Benny Bailey, and Quincy Jones!! You will also find Gigi Gryce and Clifford Scott in the saxophone section. But Lionel IS the star here. He plays swinging vibes, plays some very attacking 2 fingered (almost) piano, drums, AND sings. It is a really great album, with tunes like Moonlight in Vermont, How High The Moon (in Vermont?), Flying Home (well it wouldn't be complete without) and 7 others. A good buy for your Christmas record voucher. Its on the Montreux Jazz label TCB 02172.

The other album is more recent (DEC 2006), and contains some of Britain's foremost musicians. Almost as iconoclastic as Lionel H, Stan Tracey has teamed up with Norma Winstone and Bobby Wellins to produce a classic British album. With them are Andrew Cleyndert and Clark Tracey. Its a wonderful recording of standards, and some well known tunes with new added words. So as well as "Something's Gotta Give", you will get Norma Winstone's take on Monk's "Crepuscule With Nellie".

It's a double album, with 20 songs very well recorded. Anyone who has ever heard any of the above mentioned musicians cannot help but love this cd which is on Trio Records TR 576.

Geoff C
http://jazzfromgeoff.blogspot.com/
Posted by Geoff Cronin at 3:45 AM No comments: