I haven’t put finger to keyboard for a blog for a couple of weeks now, so I thought it was about time again!

I’ve had a further thought about value, and what we do! Record shops that disappear, clubs that close, and what do YOU perceive to be value for money?

As you know, we charge a very reasonable £5 for entry to the weekly Thursday Jazz Sessions at The Hedsor Social Club. Over the last 2 years, with this figure also giving you a chance to win the raffle, our audience has waxed to 50 and waned to 10. As is not unusual in the “10” circumstance, you examine your pricing structure. Are we too expensive? Well, I recently saw a booking form for a London Opera Company. The cheapest seats for the least popular work were £20! The best seats for a popular work were £85!

OK, Hedsor isn’t glamorous. Recently it isn’t that warm either. And we do have to tempt you out against the competition of TV (aren’t all the programs so compelling these days? Which repeats do you value most?).

BUT, you get great jazz, live in front of you. You can talk to the musicians (whilst you buy them a drink), you can expect the unexpected. Who will sit in? Will the magic of improvised jazz really take off tonight? And all for £5. Perhaps we need to persuade you that the event does have a value greater than £5. How about if we charged you the cheep seat price of £20 to get in? See what I mean?

So why not try £5’s worth tomorrow. Our guest is guitarist John Coverdale.
Next week our guest will be Simon Spillett.
That means on February 25th you can have two tenors for a fiver!

Thinking again of the record shops of yesterday, long ago and far away I used to visit a second hand record shop in Chiswick. You could buy LP’s there of people you didn’t know, just to try the music out. You could always sell it back if you didn’t like it. There, back in the 1950’s, I discovered the pianist Ralph Sutton. He was a pianist in the style of Fats Waller. It wasn’t “Modern Jazz”, or “Trad”, but it was two handed playing of recognisable tunes. Sadly, this particular LP was clapped out, and it did go back to the shop. Ralph died in 2001, but recently released is a CD of recordings he made in1994 on a friends bedroom Disklavier, a piano that recorded what you played onto a floppy disk! This perfectly relaxed and “private” session has been re recorded using a modern Yamaha Disklavier Grand Piano and released on the Soliloquy Music label (SOL 002) in 2007. For fans of stride playing, this is a must. Called “The Bedroom Sessions” it contains tunes from another era, but almost certainly you will know them. “Old Fashioned Love”, “Ring Dem Bells”, “A Hundred Years from Today” and 16 others. Well worth a search for.

Another more accessible CD is a 1989 recording on the Verve label by The Gerry Mulligan Quartet. It contains one of his “train” tunes, “The Flying Scotsman”. I remember seeing him perform this at The Brecon Jazz festival in that big Market Hall. The organisers flew him and his quartet in for the one show, and flew him back again. It was a masterly performance, he looked like the US President, and he played like the master he was. Thank goodness for recordings. This reissue (2009) is on Verve 0602527068756. No, it isn’t my telephone number! That’s the number on the cover. The number on the CD is A&M 75021-5326-2. Help, I don’t think it’s me who is mad!
Posted by Geoff Cronin at 1:53 AM 2 comments: 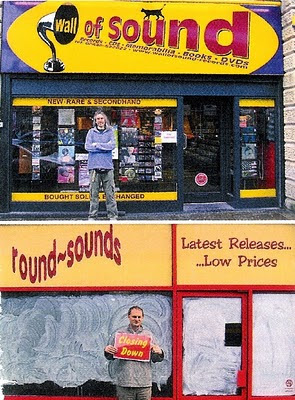 2 Record Shops, one open, the other closed!

My attention has been drawn this week to an article in January’s edition of SAGA Magazine. Under the heading “Turning the Tables, was a statement “Twenty years ago there were more than 3000 independent record shops in the UK; now there are fewer than 300”.

It goes on to consider how important a part of musical and social life used to “revolve” around visits to, and discussions with, people in your local record store. How you often discovered music you went on to love ever after in those stores you had visited. How you often purchased LP’s that you hadn’t gone out to buy, because your attention was drawn to them playing in the store.

Not long ago, at a Hedsor gig, where I sell second hand CD’s, a regular attendee said that she didn’t know any of the musicians on the cd’s, how was she supposed to find out? It should be noted that I don’t play them there. How indeed? Have we all thrown out the baby with the bathwater? I know you can find a lot of music online, places like YouTube and on downloadable MP3 music sites. But what about the social side? I know I have concentrated efforts in the last 20 years to getting people out to hear live jazz, but there is a tremendous legacy of recorded jazz that really needs to be opened up for new and old fans alike. Then I personally like to look at the sleeve notes and artwork. Who is playing, when was it recorded and where? You wont get that with your MP3 stream.

Perhaps we do take too many things for granted. How many shops have you looked in, to see for yourself the article you are interested in, and then gone home and ordered it on the internet? What happens when they, like the record shop, closes down through lack of custom?

Tonights live jazz at Hedsor by the way, will have guest saxophonist Peter Cook. We would value your support. He is a very gifted musician, please don’t make music a virtual reality!

Having written all the above, there are 2 cd’s I have listened to this week that are showcases for singers, neither of whom I have seen live!

The first, which on first spin (and all subsequent spins), delighted me, is by Dominic Alldis. “Scenes We Once Knew” seems like an appropriate title considering my SAGA comments! Dominic has been resident pianist at Pizza on the Park and had accompanied many visiting singers before realising he had a talent for it himself. His ability is definitely there, and his choice of songs, and his take on them, a delight. Dave Frishberg’s “Blizzard of Lies” will make you smile, Strayhorn’s “Lush Life” will dig your memories, and they are all performed with clear diction, excellent swing, and wonderful accompaniment, by Iain Ballamy on sax, and Gerard Presencer on trumpet. Its on a label I don’t know, Canzona Music Ltd CANZ CD5

The second is by Australian mother of three Karen Lane, who came to London in 2000. “Beautiful Love” is just, well, beautiful! Her band is NOT Avant Guard. Piano, bass, drums, sax, guitar and violin! I don’t know the names listed, but they are all great players, and she herself is a slightly edgy, soft voiced, temptress! “Softly As In A Morning Sunrise”, “Day in Day Out”, “Mood Indigo” pus 9 other are just the thing for February 14th!Available on "Smash Digital" SMD002

There is significance about February 14th that you are probably unaware of. 8 Years ago to the day, I came out of Harley Street, having had my heart re plumbed!

See you tonight in the (Hedsor) Moonlight!
Posted by Geoff Cronin at 2:28 AM 1 comment: