Another week, and if you buy from the company store, another week deeper in debt! Also, another week nearer Christmas, and further away from your summer holidays!

So, is there any hope for the future?

Thursday at The Hedsor Social Club we have another convivial evening of JAZZ from The Clive Burton Quintet.

A small bird told me that Clive is just about to acquire a computer, then I will have to ensure that all I write about him is always nice! But, as I always have written honestly about his orchestra, I have nothing to fear! So DO come along on Thursday from 8.30 pm, enjoy a drink from the club bar, enjoy the company of other jazz friends, and enjoy the superb music put on every week by the Quintet. £3 to get in, a raffle ticket will get you out again!!

On the downside this week, I must STRESS that the jazz concert at Cores End Church, billed for this coming Saturday HAS BEEN CANCELLED. So please tell anyone who may have thought of coming, that they can now watch TV all night instead!

Due to one or two "events" I have largely been away from live jazz this past week, and have caught up with some Hi Fi jazz instead.

And so to a (for some) surprising link.

British read player, eccentric and lover of cream cakes, the late Bruce Turner is one of my favourite electric listens. You may consider him to be "just" the alto player with Humphrey Lyttelton who got "Bannered" as a "Dirty Bopper", but in fact he was very firmly a player for all seasons. I have listened this week to an LP (large round black plastic about 12" diameter) of Bruce and his Jump Band, formed after he left Humph in 1959, and before he rejoined him again a few years later. Here we have him and the band playing a la Artie Shaw and his Gramercy Five, performing titles like "Accent on Swing", and, yes "Cream Puff". It's a long gone LP on the International Jazz label (AJZ/4/LP), and well worth looking out for in Oxfam type shops. With him in the band were Johnny Chiltern (later to keep George Melly company for many years), Johnny Mumford on trombone, Stan Greig on piano (in between stints with Humph on drums, and Humph on piano for many years), Tony Goffe bass and Johnny Armatage on drums.

The surprising link is that the other album I listened to in the past week has been by Lee Konitz. Called "The Real Lee Konitz" this album on the Atlantic label has tune titles like "Pennies in Minor", "My Melancholy Baby" "and Easy Livin'" which you might have considered more suited to Bruce Turner. Well, Bruce did study under Lee Konitz!! Honest, I kid you not.In the 1950's, as part of Geraldo's Navy (dance band musicians on Atlantic liners) Bruce travelled back and forth to New York, and took lessons from, and had a good friendship, with Lee. If you listen to early Bruce (with Freddy Randel for example) you can hear his style develope into the superb, instantly recognisable, British musician he became.

OK, so keep trawling the charity shops, you never know what gold you can reveal.

But don't keep it up so long that you're too tired to turn out for the live stuff. Its only by helping musicians to keep playing that you lay down any opportunity for future music that isn't all electric!

Geoff C
Posted by Geoff Cronin at 1:54 AM No comments: 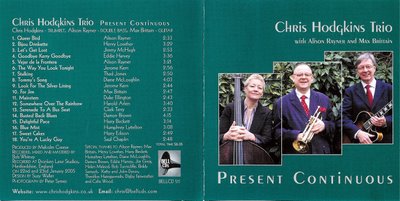 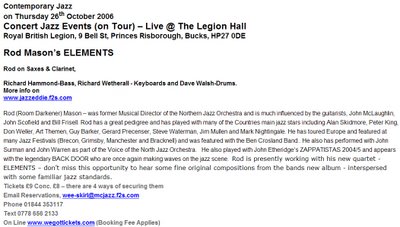 First let me say again how sad I feel at having to cancel the concert that was planed at Cores End Church for October 14th. I really hope that we will have the opportunity of putting on further music at that venue. In the meantime do let people know that it has been cancelled.

We still have some excellent music to look forward to this week. Tonight Al (yes "Al") Nicholls and his quintet will be playing at The Bourne End (Bucks) Community Centre bar, as one of Mo's "Centre Jazz" nights. The entry fee of £3 includes not only a raffle ticket, but also a light snack at half time. This event is underwritten by The Bourne End Community Association. Wouldn't it be great if other associations did the same!

Wednesday night, if you fancy a trip to Farnham in Surrey, you can catch Century Jazz with that wonderful singer Lynn Garner.

One future event to look forward to, on Eddie Fowler's promo list (Eddie was with us last week at Hedsor) is an evening of contemporary jazz on Thursday 26th October at the British Legion Hall in Princes Risborough. Some more details of this are above in the pictures section!

What have I listened too this week?

Well, as well as my usual crop of singers (one reviewed below!) was a CD by a trio with a slightly unusual combination of instruments.

As a long defunct trumpet blower myself, I am fully aware that it is not an easy instrument to hide with!! So when someone does a whole CD with trumpet, bass and guitar, you are putting yourself at high risk. I was delighted to hear Chris Hodgkins was very well practiced, and has produced a beautiful, light, set of music on a CD called "Present Continuous". For the last 20 years Chris has been the director of Jazz Services Ltd, but he has obviously kept up the practice. The guitarist is Max Brittain (often to be seen locally) and together with lady bass player Alison Rayner, they make an excellent job of some light, slightly "late night", music. Tunes include "Let's get Lost", "Mainstem", "Stalking", "Look for a Silver Lining" and "Somewhere Over The Rainbow", a really wide program choice that really comes off. It can be found (if searched for, Smith's wont have it !), on Bell CDs BELLCD 511 (you could try http://www.chrishodgkins.co.uk/).

The other CD is more mature (By 7 years) from Colin Towns' Mask Quintet with Maria Pia De Vito. Its called "Still Life" and its on Provocateur Records. This is a "modern" modern jazz record that I found quite breathtaking in its scope. It has some marvellous musicians taking part (see picture above again for more details), and on 2 tracks has a full orchestral setting as well. With people like Julian Arguelles, and John Parricelli on board with Maria's clear soprano voice, the overall effect is stunning. If you are prepared to get towards the edge of your known musical box, give this one a try!

That's it for now,

Geoff C
Posted by Geoff Cronin at 3:01 AM No comments: