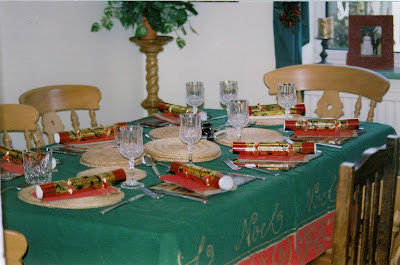 I would like to take this opportunity of wishing all the readers of my Jazz Nagging Blog,

I also hope that the New Year will defy the pundits, and prove to be,

a very profitable one.

who have played for Jazz Angels,
at
The Hedsor Social Club.

Thank you for all the joy you bring with your music, and thank you all for your friendships as well.

May your stockings be filled with "Shiny", may your Sleigh "Ride",
and lets make 2009 a Jazz Band "Ball"
Posted by Geoff Cronin at 12:08 PM No comments:

OK Fans, we are fast rushing towards the turkey (trot) season, which can only be preceded by the great rap, sorry wrap, and that itself buy (sorry again) by a shopping festival. I do mean we are yet again very near CHRISTMAS.

So, I thought I would remind you first that before the finalisation of the above, we do have one more session of JAZZ at The Hedsor Social Club. This Thursday December 18th we have a normal session at Hedsor, with Clive playing Santa Claus (no?), possibly to Mike Wills principle boy (or would he be one of the reindeer, he is used to a lot of travel, coming from Oxford to play for us!).

But seriously folks, another fine session of jazz (or another session of fine jazz) will be coming to Hedsor this Thursday. As ever, you can enjoy this pre turkey feast of music for the measly sum of £5. Start Time is 8.30 pm.

Sadly this will be the last session at Hedsor until January 8th 2009. I know, another year older, and deeper in dept, but that’s how we are, generous with the music.

On a less silly note (I did spend all day today Christmas Shopping), I thought I would write about 3 CD’s that I have enjoyed recently.

Three very different jazz styles, from three different musical perspectives. One I know I have written about before in the blog, but I thought as Christmas draws near, you may be tempted to try and find a shop that still retails Jazz CD’s (no, Smith’s wont stock these!).

In recording date order, the first is

In 1951 an Australian Jazz Band visited England, and spent a reasonable length of time here. “Graeme Bell’s Australian Jazz Band” is reputed to have started dancing to jazz in the UK (prior to his visit, most people sat and listened a bit like being at a Revival Meeting). Graeme actually stayed in the flat below Humph, and a great musical collaboration took place. The mix of musicians made a number of recordings together, exploring bigger ensembles, and often West Indian rhythms. These recordings are now mostly all together on this CD. The thing that strikes me most is what a good big band sound Humph organised in 1951. Don’t forget too, that this was long before Humph invited a saxophone player into his regular band. Here, many years (well 2 or 3) before Bruce Turner joined the front line, we have “Lazy” Ade Monsbourgh on alto sax, and Don “Pixie” Roberts on tenor sax as well.

There is a real mix of styles, and group numbers, but it is all great stuff. For anyone who liked Humph’s band in its later years, do go out and buy it. LACD266. It may have the odd banjo in there, but Trad it ain't. Trad itself wasn’t invented for another 8 years of so. Before then the purists called it Revivalist music. And this wasn’t that either!

The Second CD is completely different, but with a link to the first.

Norma Winstone is a singer who has forged a sound that has been copied by a number of other jazz singers. It can on occasion, be unpredictable. But in “Manhattan In The Rain” she performs wonderfully intoned, slightly cool, but wonderfully expressive vocal jazz. I heard it on an Internet radio show, and just had to go and buy it. The link to Humph is Tony Coe. Tony was an 18 year old when he joined Humph around 1959. Now, more mature, his fluid, bubbling sound is a perfect foil for Norma’s clarity. The killer song for me is “People Will Say Were In Love”. Steve Gray on keyboard, Chris Laurence on bass and Tony on tenor contrive to counter melody Norma. It doesn’t shake her timing or composure in any way, and the counterpoint it produces is exquisite. It’s a wonderful CD, and I think better than her more recent collaborations with Swedish musicians. This one goes up to the edge, but doesn’t ask you to step beyond.

It was recorded in 1997. Its on Edoc Records ENOCD 001. You could try 8 Wellington Parade, Walmer, Deal CT14 8AA (the address on the CD) or search Google! But it IS worth the effort. 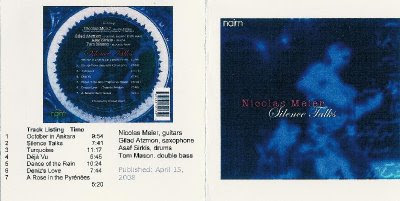 The final CD this time round is definitely different again. Nicholas Meier is a John McClaughlan style guitarist who happens to come from Switzerland, and is married to a Turkish wife. Combine him with Israeli born sax player Giled Atzmon and you have a CD that has very mixed, but very exciting, musical origins. Add in Asaf Sirkis on drums and Tom Mason on bass, and you might be thinking I’m talking about a world music release played on the BBC World Service at some ungodly hour of the night. But no, I claim it to be jazz. It’s exciting, it’s rhythmic, it swings, and it will widen your musical experience if you seek it out. It is wonderfully recorded on Naim (yes they make very expensive amplifiers and CD players), and came out in April this year. Silence Talks is the album on Naim CD113.

And with that I will retreat to the Turkey I can eat until another year. Don’t forget, it is you who is responsible for keeping live Jazz alive. No audience, no music.

Do have a superb Chistmas, and celebrate the New Year with hope.
Geoff C
Posted by Geoff Cronin at 1:54 PM No comments: 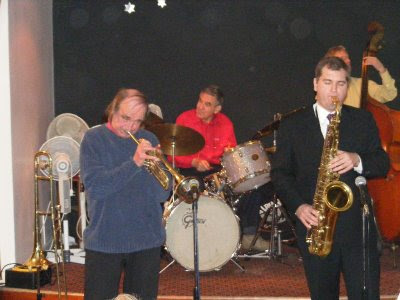 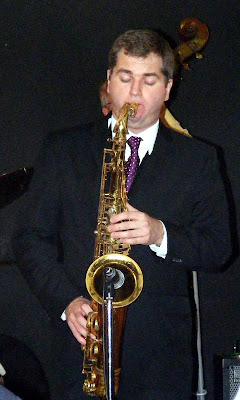 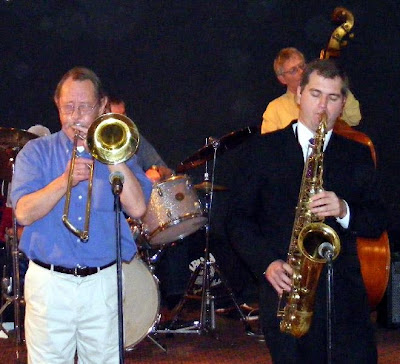 “WOW”, as a Newport jazz festival compare was recorded as saying after a terrific set from Lionel Hampton’s big Band in 1966. “WOW”

Last nights Jazz Party at Hedsor was another of those WOW nights.

I think that the very good crowd who turned out had every good reason to say WOW too. The music was excellent, Simon Spillett won more new friends, and our regular quintet, led by Clive Burton, showed just how good and versatile they are.

One of the strangest musical collaborations (that I don’t think I would have called), really worked. A duet, with rhythm accompaniment, between Simon Spillett and Cookham’s fabulous Shirtlifters (a trad band!) lead trumpet player, John Slater.
It was what jazz is always all about. Its all very well for a regular band, to read the scores and rehearse, play well and get it right on the night. BUT for two musicians who had never played together before, and who come from almost the opposite ends of the musical spectum of jazz, to combine and produce sheer magic together was just one of those jazz moments of history. It’s what jazz is all about, it’s what LIVE JAZZ is all about, and if you only listen to records, even on your highest Hi Fi, then you will never experience the thrill. Yes, OK, it doesn’t always work, we’ve all been to disappointing musical events. It does work much of the time though, and if your not there, you will never get that thrill.

The closing number (“Hit That Jive Jack”) was again, that well worn, “lets get all the players up at the same time to finish the evening” scenario. But it was absolutely magic. One, irregular, attendee, said afterwards that Martin Hart should play more drum solos! It wasn’t pre planned, he called for a go!! And it fitted within the framework. And you could feel the combined smile of the audience widen as he played. The riffs backing all the solos were something from the best of the big band era, and I’m also sure many were surprised to see Clive lead the singing too, so Jamie Cullem, watch out.

These Jazz concerts in Hedsor’s Big Room are becoming a regular event. We are making more friends as we do them, and we will do them again.

So don’t miss out, start coming out to Hedsor to see for yourself what great jazz is being performed just up the road from you.
I'll tell you about some great CD's to add to your collection next time, but, unless next time is after the festive day, may I wish all my readers (who?), a Very Happy Christmas Time.
Geoff C
Posted by Geoff Cronin at 2:05 AM No comments: